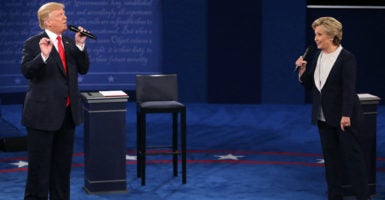 During the presidential debate on Oct. 9 at Washington University in St. Louis, Donald Trump told Hillary Clinton he would ask his attorney general to appoint a special prosecutor to investigate her. (Photo: Christian Gooden/St. Louis Post-Dispatch /TNS/Newscom)

“I don’t want to hurt the Clintons,” Trump said in a wide-ranging interview with The New York Times.

The news came after a rough campaign where Clinton faced an FBI investigation into classified information sent and received on her private email server.

FBI Director James Comey announced in July he was not recommending a prosecution. However, 11 days before the election, he announced he was reopening the probe, only to close it two days before Election Day.

The FBI is reportedly also investigating potential ties between donors to the Clinton Foundation and actions taken by Clinton when she was the secretary of state.

“If she broke the law, this is a decision that should be left to law enforcement,” @NLPC says.

“It was a premature decision [not to continue investigating Clinton] because we don’t know what evidence on the email server or Clinton Foundation will emerge,” said Peter Flaherty, president of the National Legal and Policy Center, a conservative watchdog group, told The Daily Signal.

“It shouldn’t be the call of the White House anyway, but should be left up to the new attorney general—and IRS commissioner—whether to investigate,” Flaherty continued, noting the IRS should look into the nonprofit status of the Clinton Foundation. “Prosecuting Hillary might seem like piling on from a political sense, but if she broke the law, this is a decision that should be left to law enforcement.”

Trump’s comments to The New York Times followed an interview earlier Tuesday with Trump campaign manager Kellyanne Conway in which she expressed a similar view. Trump said his administration would not pursue further investigation into the email server or the Clinton Foundation.

Trump further told the Times, “we’ll have people that do things,” which the newspaper said could mean the FBI, but Trump was clear he would not push the investigation.

Following her defeat, The Daily Signal reported that Clinton faced at least four legal probes. Regardless of Trump’s decision, she could still face scrutiny from Republican-controlled committees in the House and Senate, as well as a Federal Election Commission investigation of her presidential campaign.

During the second presidential debate, Trump told Clinton, “If I win, I am going to instruct my attorney general to get a special prosecutor to look into your situation.”

“Donald Trump must commit his administration to a serious, independent investigation of the very serious Clinton national security, email, and pay-to-play scandals,” Fitton said in a statement.

“If Mr. Trump’s appointees continue the Obama administration’s politicized spiking of a criminal investigation of Hillary Clinton, it would be a betrayal of his promise to the American people to ‘drain the swamp’ of out-of-control corruption in Washington, D.C.,” Fitton continued. “President-elect Trump should focus on healing the broken justice system, affirm the rule of law, and appoint a special prosecutor to investigate the Clinton scandals.”

The matter muddies the waters beyond what the FBI might already be investigating about Clinton, said Ilya Shapiro, senior fellow of constitutional studies at the Cato Institute, a libertarian think tank.

“It’s a little disturbing for a president to say, ‘I’m showing mercy and the fate of my political opponent is in my power,’” Shapiro told The Daily Signal. “It’s not his place to decide which political enemies to go after or not go after. The FBI and the Department of Justice should go forward without political interference.”

Shapiro added this could be politically costly.

“I think more of his supporters voted against Clinton than for him, so it would have been better to stay silent rather than act like a benevolent leader who holds the fate of his opponent at his whim,” Shapiro added.

Conway, Trump’s campaign manager and current adviser in the transition, presented the case for turning the page during an interview on MSNBC’s “Morning Joe” on Tuesday.

“I think Hillary Clinton still has to face the fact that a majority of Americans don’t find her to be honest or trustworthy,” Conway said. “If Donald Trump can help her heal, then perhaps that’s a good thing to do.”

Conway added, “I think he’s thinking of many different things as he prepares to become the president of the United States, and things that sound like the campaign are not among them.”

Trump foreshadowed that he might not pursue a special prosecutor during an interview with CBS News’ “60 Minutes” after the election.

From a political standpoint, Trump’s decision could be mixed, said Gary Rose, chairman of the political science department at Sacred Heart University.

“This does make him more statesmanlike because it probably is for the good of the country to move on, even if his base will not be all that happy,” Rose told The Daily Signal. “It does seem to turn the page and provide a way to say ‘I’m a statesman.’ But, if a crime was committed, perhaps that wasn’t his call. A line might have been crossed.”