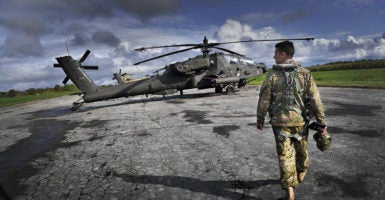 Aurora 17 was the largest defense exercise of its kind for Sweden since the end of the Cold War. (Photo: Wixtröm Jimmy/Zuma Press/Newscom)

Sweden, a country with a close defense relationship with the U.S. and NATO, hosted its largest military exercise in 23 years this September as a demonstration of deterrence against Russian aggression.

U.S. forces played an important role and in doing so helped to strengthen the U.S. military position in Europe.

Exercises are a key means of building relations with foreign militaries through military-to-military contact, increasing their capacity, and improving interoperability between forces. They can also serve to highlight capabilities to deter potential adversaries or reassure allies.

The exercise, named “Aurora 17,” simulated Sweden’s ability to defend its own territory from attack. One of the key features of this exercise was an attack on its Gotland Island in the Baltic Sea—but the exercise went far beyond that with air, land, and sea combat simulating a broader attack on Sweden.

Roughly 19,000 Swedish personnel from various sectors of the government participated, along with personnel from Denmark, Estonia, Finland, France, Lithuania, and Norway. This total defense exercise was the largest of its kind for Sweden since the end of the Cold War.

One of the highlights of the exercise involved Swedish air defense training against AH-64 Apache attack helicopters with both daytime and nighttime operations, a key opportunity for both forces to improve their tactics.

The Swedish forces got the unique chance to train against very sophisticated attack helicopters, while in turn, the American Apache pilots got to practice against different systems that were able to challenge them tactically in some instances.

Maj. Romanowski of the American 12th Combat Aviation Brigade summed up the benefits to the U.S. side:

First of all, it’s important for us to practice the logistics that come with moving the unit from one country to another. Secondly, we’re able to exercise against systems that we don’t normally encounter and, not least, we get knowledge of how the Swedish armed forces and its various parts operate, which is so important if we ever find ourselves collaborating in another context.

Remarking on the exercise, Gen. Curtis M. Scaparrotti, the commander of U.S. European Command, said, “The interoperability and cooperation of Sweden and the United States remains vital.”

As Heritage Foundation foreign policy experts Luke Coffey and Daniel Kochis have argued, Sweden and Finland are important partners for the U.S. and NATO, and would play a vital role in any military defense of the Baltic states, a group of small NATO countries bordering Russia.

However, since Sweden is not an official part of NATO, but only a partner, its cooperation is not guaranteed. Without Sweden’s participation, America’s ability to defend its NATO allies in the northern part of Europe would be much more challenging.

As The Heritage Foundation’s Index of U.S. Military Strength points out, Russia has shown a willingness to redraw borders with force through a combination of conventional and unconventional means.

Strengthening relationships with and improving the capabilities of America’s NATO allies, whether through encouraging more defense spending or exercises, are important for improving the ability of the alliance to deter aggression.

Reducing Moscow’s ability to intimidate Sweden by enabling it to defend itself and work with U.S. forces on a larger scale provides a wide range of benefits to American interests.

For that reason, continuing to prioritize U.S. participation in exercises like Aurora 17 with key partners, and approving the Pentagon’s request for funding for Combatant Command Exercise and Engagement and Training Transformation (which is the account that funds these important activities for $550.5 million for 2018) will go a long way toward deterring potential adversaries and protecting the U.S. and its allies.