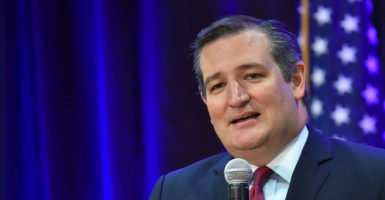 “It is a test of the United States Senate,” Sen. Ted Cruz says of the confirmation vote for Amy Coney Barrett as a federal appeals judge. Cruz is pictured here during an August fundraising luncheon in San Antonio, Texas. (Photo: Robin Jerstad/ZumaPress/Newscom)

>>> Update: The Senate voted to confirm Barrett by a vote of 55-43. The three Democrats who backed Barrett were Joe Donnelly of Indiana, Tim Kaine of Virginia, and Joe Manchin of West Virginia. Donnelly seeks re-election in Barrett’s home state.

Cruz had challenged Democrats to support Barrett, President Donald Trump’s pick for the 7th U.S. Circuit Court of Appeals, who had faced sharp questioning from Democrats for her Catholic faith.

“I do think we’re seeing a test, but it’s not a test of the nominees. It is a test of the United States Senate,” Cruz said at a press conference Monday at the Capitol also featuring eight other senators among supporters of Barrett’s confirmation.

Not voting were Democrats Claire McCaskill of Missouri, whose husband is in intensive care with a heart condition, and Bob Menendez of New Jersey, who is on trial on corruption charges.

Sen. Dianne Feinstein, D-Calif., and other Senate Democrats had questioned Barrett about her Catholic faith at a Judiciary Committee hearing Sept. 6.

“The dogma lives loudly within you, and that’s a concern,” Feinstein, who is Jewish, said at the hearing.

Cruz said the Democratic Party is not the same party it was when President John F. Kennedy, a Democrat who faced his own doubters because he was Catholic, ran for office. The current party, the Texas Republican said, is more “secular” and “happily embraces atheists.”

Cruz, a Baptist, recalled a time when “legal barriers” were put in front of Catholics.

“We are seeing a re-emergence of that same hostility to the Catholic Church,” Cruz said, adding, “And today in this Senate, we have seen repeatedly nominees grilled not for their qualifications, not for their record, but for their faith.”

“President Obama said on a number of occasions that he wanted judges who had empathy for parties [to legal disputes],” McConnell said. “Well, the problem with that [is], if you’re not the party for whom the judge has empathy, you’re in for a pretty rough ride.”

McConnell, himself a Baptist, said Trump picks judges who interpret laws as they are written.

Barrett, he added, has a right to profess her faith in this country, but knows not to let her religious beliefs sway her decisions as a judge.

“I want to express my sincere hope that my colleagues’ behaviors won’t discourage religious Americans from seeking public office and committing to public service,” Grassley, also a Baptist, said.

At least 15 of the Senate’s 46 Democrats identify themselves as Catholic, according to a Wikipedia entry. They include Dick Durbin of Illinois, who also questioned the role of Barrett’s faith.

Joshua McCaig, president of the Catholic Bar Association, which supports Catholic attorneys, said his heart “sank” when he was watching the Sept. 6 hearing.

“I saw a country in which my children, who are being raised Catholic, may be disqualified from participating in the civic life of their beloved nation for being faithful to that religious tradition,” McCaig said.

The line of questioning of Barrett was an attack on anyone who has faith, he added.

Sen. Mike Lee, R-Utah, said Barrett’s religious beliefs have nothing to do with being a judge.

Lee, a Mormon, said the Democrats asked questions as if being religious was a problem.

Penny Young Nance, chief executive officer and president of Concerned Women for America, an organization that “promotes and protects biblical values and constitutional principles,” thanked GOP senators for standing with women of faith.

“The Christian dogma that a few find appalling embodies the best of humanity,” Nance said. “It calls us to love others as we do ourselves, to speak for those who can’t speak for themselves, to feed the hungry.”

Other Republican senators defending Barrett and religious liberty at the press conference were John Cornyn of Texas, a member of Churches of Christ; Todd Young of Indiana, a Protestant; Orrin Hatch of Utah, a Mormon; Jim Inhofe of Oklahoma, a Presbyterian; and James Lankford of Oklahoma, a Baptist.

Feinstein defended herself Sept. 17 on CNN’s “State of the Union,” saying she thought Catholicism “is a great religion,” but that Barrett’s past statements were worrisome.

“She’s a professor, which is fine, but all we have to look at are her writings, and in her writings she makes some statements which are questionable,” the California Democrat said.

Feinstein said she couldn’t recall the direct quote from Barrett that worried her, but paraphrased the law professor as saying “a Catholic judge cannot be independent.”

Feinstein may have been referring to an article on Catholic judges and capital cases that Barrett, born in 1972, co-wrote as a law student.

The six-figure ad campaign, which started Sept. 16, lasted for 10 days.

“This is going to be known as Feinstein’s Folly,” Carrie Severino, chief counsel and policy director of the Judicial Crisis Network, said at the time.

“Her line of questioning reeked of ‘No Catholics need apply,’ while ignoring professor Barrett’s stellar qualifications, experience, and fierce commitment to defending the Constitution,” Severino said. “Feinstein was fundamentally at odds with our constitutional commitment to religious freedom, not to mention politically tone-deaf.”

Ken McIntyre and Rachel del Guidice contributed to this report, which was updated to reflect the Senate vote.