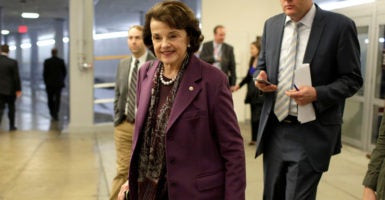 “The dogma lives loudly within you, and that’s a concern,” Feinstein said at the hearing in a phrase that made headlines.

Under Senate tradition, hearings aren’t held for a judicial nominee until his or her home state senators submit “blue slips” showing their consent to advancing the nomination.

The ad campaign attacking Franken was announced Wednesday and is running for two weeks in Minneapolis. The ad buy includes CNN and MSNBC. The ad campaign will also air digitally throughout the state.

“Franken is trying to block the Judiciary Committee from even reviewing Justice Stras’ sterling record, and his refusal to return the blue slip for Justice Stras is unacceptable,” said Carrie Severino, chief counsel and policy director of the Judicial Crisis Network.

“By not returning his blue slip, Sen. Franken is choosing Washington politics over the people of Minnesota.”

In a statement released Sept. 5, Franken attacked Trump for relying on conservative organizations, such as the Federalist Society and The Heritage Foundation, for judicial nominees.

“But as I have familiarized myself with Justice Stras’ record—not just his past decisions, but his professional experience and past statements—I have grown concerned that, if confirmed to the federal bench, Justice Stras would be a deeply conservative jurist in the mold of Supreme Court Justices Clarence Thomas and Antonin Scalia, justices who the nominee himself has identified as role models,” Franken said.

The ad campaign against Feinstein was announced Friday and is attacking what the organization is calling Feinstein’s “Religious Litmus Test.” The campaign will be digitally focused and starts Saturday. It will last for 10 days with a six-figure budget.

“This is going to be known as Feinstein’s Folly,” Severino said. “Her line of questioning reeked of ‘No Catholics Need Apply,’ while ignoring professor Barrett’s stellar qualifications, experience and fierce commitment to defending the Constitution. Feinstein was fundamentally at odds with our constitutional commitment to religious freedom, not to mention politically tone-deaf.”

Franken’s and Feinstein’s offices did not respond to a request for comment by publication deadline.