If Trump Skips This Event, It Could Undercut US Influence in Asia 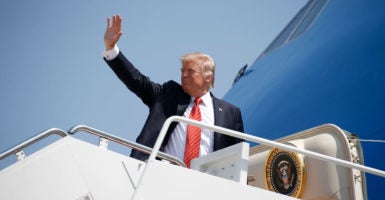 Early this week, it became clear that President Donald Trump had decided not to attend the East Asia Summit in the Philippines on Nov. 14.

The annual summit brings together leaders from the 10 Southeast Asian countries with eight others from outside the Association of Southeast Asian Nations—namely, the U.S., China, Japan, South Korea, Australia, New Zealand, Russia, and India.

According to reports, Trump will attend some of the events around the summit, like a U.S.-Association of Southeast Asian Nations meeting and a gala celebration of the association’s 50th anniversary, but will leave for home before the summit itself.

An 11-day trip that will take him from Hawaii to Japan, South Korea, China, Vietnam, and the Philippines is a serious time commitment on the part of any president. It is a clear demonstration of America’s historic commitment to peace and security in the Western Pacific.

So why is it a big deal if he misses a multilateral meeting of East Asian leaders on the last day? There are a few reasons.

First, the U.S. had earned credit for the president’s decision to embark on the Asia trip. Not attending this summit forfeits some of that credit, primarily with countries in Southeast Asia.

Outside of economic issues, theAssociation of Southeast Asian Nations is mostly a convener of nations, and as such, it is the center of regional diplomacy. Attending the full range of summit events would demonstrate U.S. support for the central role that the association plays.

It would also better frame the more substantively important things the U.S. is doing bilaterally in areas from counterterrorism and maritime security to human rights.

Second, the East Asia Summit will be producing a statement that summarizes the consensus of the leaders across a range of security issues, including the South China Sea and North Korea’s nuclear program.

Sitting down with the leaders there is an opportunity for the president to make his points on these issues. It would help shape a consensus that can then be used in other diplomatic settings.

The administration has offered the solace of Secretary of State Rex Tillerson’s attendance at the East Asia Summit. Tillerson is a fine representative of the U.S., but he doesn’t carry the full weight of the presidency. He simply will not be as effective to these ends.

Third, there is a competition going on in the Pacific between the U.S. and China. There are areas we can work together, but we have many directly opposed interests. In fact, on the most critical issue of the day—North Korea—we are at somewhat cross-purposes.

Not attending the East Asia Summit would leave the field free for the Chinese to drive the consensus on issues important to U.S. interests, and to achieve a public relations coup at America’s expense.

Eleven days is a long time to be on the road. Trump is to be commended for making good on the several promises he made over his first year in office to make these visits.

Extending one more day, making another speech, and seeing some of his new friends again at the East Asia Summit is an easy way to reaffirm U.S. leadership in the region and support American interests.