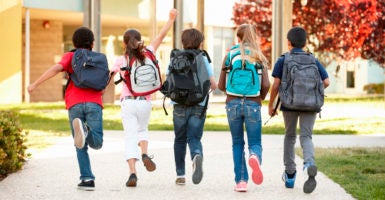 Asian-American parents are concerned, even angry, because they suspect affirmative action prompted a suburban Maryland school district to overhaul admissions to its programs for gifted and talented students.(Photo: Ingram Publishing/Newscom)

About 100 parents, largely of Chinese-American descent, gathered on a recent Saturday afternoon inside an elementary school near Washington, D.C., to hear Heritage Foundation scholar Michael Gonzalez speak against racial preferences in school admissions.

Gonzalez, a senior fellow in the leading conservative think tank’s Davis Institute for International Studies who has written on the subject, delved into the roots of the affirmative action crisis that has frustrated many Asian-Americans for years.

He argued that affirmative action is the byproduct of the racial identity politics of the left.

“Merit is the antidote to racism,” Gonzalez said, to the applause of the crowd.

His audience at Farmland Elementary in Rockville, Maryland, is part of a growing wave of Chinese-American activism in the Montgomery County public school system.

These parents are concerned, even angry, because they suspect affirmative action prompted the Montgomery County Board of Education to overhaul admissions to its highly touted programs for gifted and talented students.

The school board decided in 2016 to change the way the school system selects students for gifted and talented programs.

Since then, the percentage of Asian-Americans enrolled in these programs has dropped by 20 percent, and parents say the changes may have to do with factors other than merit.

The July 7 meeting in Rockville was organized by the Association for Education Fairness, a new grassroots organization of Asian-Americans created to demand equal treatment in education. The group gained visibility in the Chinese-American community through WeChat, a social messaging platform.

“The school board claims that the admissions system is based entirely on data,” Eva Guo, lead organizer of the Association for Education Fairness, said in a phone interview with The Daily Signal.

But, Guo said, the school system “will not respond to parents’ requests for that data.”

The group’s founding comes at a critical point in Asian-Americans’ educational activism, after Asian-American students filed a lawsuit against Harvard University alleging that the school discriminates against them  in admissions processes.

Many of those at the meeting voiced concerns with Harvard’s policies, drawing parallels between what they consider mistreatment in the Montgomery County school system and Harvard’s own racial balancing programs.

The school board consulted an outside company, Metis Associates, to help construct a revamped admissions program. In 2016, it advised the board to change standards and admissions procedures to narrow a racial education gap and reach desired diversity levels.

But, Guo said, it isn’t clear exactly what selection criteria the school board uses to determine how to reach these goals in admissions to gifted and talented programs.

The Association for Education Fairness contends the 2016 actions severely reduced the difficulty of the entrance exam, which allowed a greater range of students to achieve desired scores.

This allowed leaders of an admissions committee to decide who gets in based on a range of other factors, including socioeconomic status and the ability to speak languages other than English at home, the group argues.

“Our kids make so much effort to study for the test,” lamented one Asian-American parent at the event who has children in the county schools. “It’s all wasted under the new exam.”

Guo said she would like to see the Association for Education Fairness grow to the point that it can fight for the educational rights of all those unfairly treated across the country.

“The worst part is, they’re not even setting standards based on things we can change about ourselves,” said Liu Ruohong, an Asian-American mother who attended the meeting. “We’ve got to stand up for our children.”

Another mother at the event, who is white, told The Daily Signal: “I am deeply concerned about my highly able kid, whose academic needs are not met by the Montgomery County Public Schools’ regular curriculum.”

Guo describes her organization’s mission as “to promote and advocate education fairness for all who have the right for equality.”

She said she wants to connect with government agencies and think tanks, such as The Heritage Foundation, to achieve policy changes.

If the organization manages to roll back negative aspects of Montgomery County’s school admissions procedures, Guo said, she will target other school systems where racial balancing is happening.