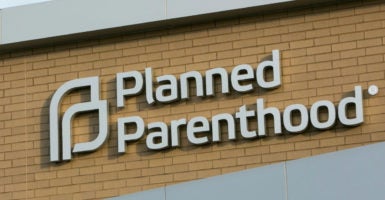 The U.S. Court of Appeals for the 8th Circuit ruled that Arkansas' 2015 cancellation of a Medicaid contract with Planned Parenthood is legally valid. (Photo: Kris Tripplaar/Sipa USA/Newscom)

This is good news for other states that decide to stop allowing taxpayers’ money to flow to Planned Parenthood.

Arkansas Gov. Asa Hutchinson announced in August 2015 that the state would terminate its contract following the release of videos that raised disturbing allegations of Planned Parenthood profiting from the sale of organs from aborted babies’ body parts.

Instead, Planned Parenthood rounded up a group of patients (known as the “Jane Does”) to file suit in federal court.

In their lawsuit, the Jane Does argue that, under the Medicaid Act’s “free choice of provider” provision, the state cannot prohibit them from obtaining medical care from the qualified provider of their choice—unless that provider is unfit to provide medical services.

The main question at issue is whether the Jane Does have a judicially enforceable right to select their health care provider. Several federal courts have weighed in on this issue in cases out of Louisiana, Indiana, Michigan, and Arizona.

The Jane Does claim this language allows them to sue the state for seeking to deprive them of receiving services from any qualified health care provider, even though Planned Parenthood had been decertified as an approved provider.

A federal district court in Little Rock, Arkansas, granted the Jane Does’ request for a preliminary injunction, preventing the state from cutting off Planned Parenthood’s Medicaid funding.

On appeal, the U.S. Court of Appeals of the 8th Circuit overturned the injunction in an opinion by Judge Steven Colloton (one of President Donald Trump’s potential Supreme Court nominees).

In the 2-1 decision, Colloton concluded that a law directing government officials to take an action (as § 23(A) does) “does not confer the sort of ‘individual entitlement’ that is enforceable” in court by beneficiaries of that law.

Further, reading § 23(A) in light of the broader statutory text, Colloton found that it’s not clear Congress intended to create an individual right—and Congress’ “unambiguous” intent is a prerequisite for the Jane Does’ lawsuit to move forward.

Other courts, including the 7th Circuit in a 2012 decision out of Indiana by Judge Diane Sykes (another Trump short-lister), have reached the opposite conclusion.

Furthermore, the 5th Circuit is currently considering Texas’ appeal of a district court ruling that prevented it from blocking Medicaid funds from going to a Planned Parenthood affiliate that was previously forced to pay the state $1.4 million in a settlement for allegations of Medicaid fraud.

If the 5th Circuit joins the 8th Circuit in ruling against allowing private rights of action to enforce the Medicaid “free choice of provider” provision, that would tee the issue up for Supreme Court review. A split among the federal appeals courts increases the odds that the justices will decide to review a case.

Now the ball is back in the Jane Does’ court, as they weigh whether to ask the full 8th Circuit to rehear their case or go straight to the Supreme Court for review.

A Supreme Court ruling that allowed states to freely terminate Medicaid agreements would deal a major blow to Planned Parenthood, which receives half a billion dollars from taxpayers each year.

As Planned Parenthood’s most recent annual report showed, abortions at its clinics are on the rise, while cancer treatment and screenings, HPV vaccinations, contraception, and prenatal services have rapidly declined.

Though the Hyde Amendment prevents Medicaid funding for abortions in most circumstances, money is fungible. That means the taxpayer dollars Planned Parenthood receives for non-abortion services free up other resources for abortion.

If states choose to decertify Planned Parenthood as a Medicaid provider, scarce government funds could instead be directed to the thousands of centers that actually provide health care for women without entanglement in abortion on demand.