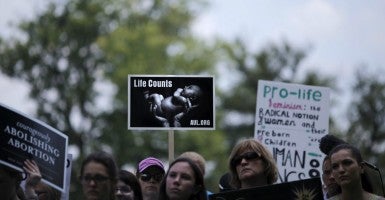 Planned Parenthood spokespersons have condemned the Center for Medical Progress, the pro-life organization behind the videos, as “anti-choice extremists” and the videos as “heavily edited.”

The Daily Signal previously reported that Alabama, Louisiana, and New Hampshire have cut taxpayer funding to the organization following the release of the videos.

Arkansas Gov. Asa Hutchinson, a Republican, said in a statement that he has directed the state’s Department of Human Services to end its contracts with the organization.

“It is apparent that after the recent revelations on the actions of Planned Parenthood, that this organization does not represent the values of the people of our state and Arkansas is better served by terminating any and all existing contracts with them. This includes their affiliated organization, Planned Parenthood of Arkansas and Eastern Oklahoma,” Hutchinson said.

Utah Gov. Gary Herbert, a Republican, also announced Friday that he had directed the state’s Department of Health to cease funding Planned Parenthood.

According to the Montgomery Advertiser newspaper, state officials have been told by the Obama administration that cutting funding for Planned Parenthood may be in violation of federal law.

“Longstanding Medicaid laws prohibit states from restricting individuals who have coverage through Medicaid from receiving care from a qualified provider,” a spokesperson for the U.S. Department of Health and Human Services said in a statement. “By restricting which provider a woman could choose to receive care from, women could lose access to critical preventive care, such as cancer screenings.”

State officials have argued that there are numerous other providers where individuals with Medicaid coverage may receive care.

According to a map released by Alliance Defending Freedom and the Charlotte Lozier Institute, “there are currently 13,540 clinics providing comprehensive health care for women, versus 665 Planned Parenthood locations,” reported The Daily Signal’s Kelsey Harkness.

Sarah Torre, a policy analyst at The Heritage Foundation, wrote in a recent op-ed that “Congress is not bound by those regulations and can determine which providers are ‘qualified’ to perform the services covered under the entitlement program.”

“Planned Parenthood does not have a right to the hard-earned money of American taxpayers,” Torre wrote.

This post has been updated to correct the name of the Montgomery Advertiser.