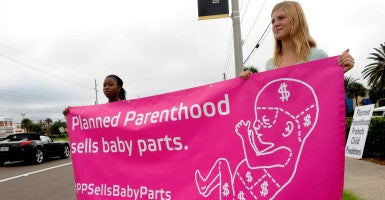 A federal judge has ordered Arkansas to continue to pay for three women to receive services at Planned Parenthood. (Photo: Paul Hennessy/Polaris/Newscom)

A judge has ordered the state of Arkansas to continue payments to Planned Parenthood on behalf of three Medicaid patients who sued the state after Gov. Asa Hutchinson attempted to defund the organization.

U.S. District Judge Kristine Baker issued a preliminary injunction mandating that the state continue to pay for three unidentified women—referred to as Jane Does in court documents—to receive family planning services at Planned Parenthood. She said that if the women went without Planned Parenthood’s services, they would “incur irreparable harm,” Reuters reported.

Hutchinson, a Republican, said in a statement that “the Court’s ruling is limited to three individuals.”

Planned Parenthood fired back at the governor.

“Governor Hutchinson’s order to cancel Planned Parenthood’s Medicaid contract is illegal and it does not reflect the values of Arkansans who care about women’s health,” said Suzanna de Baca, chief executive of Planned Parenthood of the Heartland, in a statement provided to the Arkansas Democrat-Gazette.

Planned Parenthood faces allegations that it is trafficking aborted fetal body parts after undercover videos of the organization’s senior executives were released by the Center for Medical Progress. Profiting from the sale of fetal human organs is a felony in the United States. Spokespersons for Planned Parenthood have denied participation in illegal transactions and have claimed they are merely reimbursed for the costs associated with a donation to researchers.

Hutchinson announced his intention to defund Planned Parenthood in Arkansas after the videos surfaced.

There are 179 federally qualified community health centers in Arkansas, according to Alliance Defending Freedom.