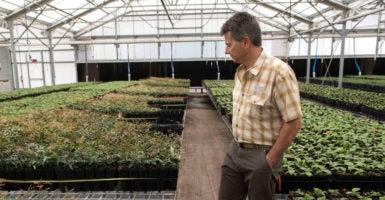 John Duarte is facing $2.8 million in fines and an estimated minimum of $13 million in mitigation credits for running afoul of the EPA's controversial Waters of the U.S. rule. (Photo: Andy Alfaro/Zuma Press /Newscom)

This week, a federal judge will determine whether to levy a multimillion-dollar fine against John Duarte, as requested by the Department of Justice.

Duarte’s wrongdoing? Plowing fields without first asking the permission of the U.S. Army Corps of Engineers.

In 2012, Duarte—a fourth-generation California farmer and owner of a large agricultural nursery—began plowing 450 acres of property in order to plant winter wheat.

This typical farming practice soon caught the attention of a local Corps project manager, who was horrified to see that the plowed land contained a smattering of vernal pools.

These generally dry, shallow land depressions temporarily collect excess rainwater, which quickly evaporates. Depending on weather variations, they may not fill with water at all.

The Corps claimed the authority to regulate these pools as “wetlands” under the Clean Water Act.

The Clean Water Act grants both it and the Environmental Protection Agency enforcement mechanisms to “restore and maintain the physical, biological, and chemical integrity of the nation’s waters.” It authorizes the Corps to issue permits for the discharge of dredged or fill material into “navigable waters.”

However, it also exempts from permit requirements “normal farming … activities such as plowing, seeding, [or] cultivating.”

Unfortunately for Duarte, the project manager determined the plowing did not fall under exempted farming practices. The Corps deemed his furrows “small mountain ranges” that discharged pollutants into the vernal pools without a permit.

The protection of America’s waterways is a legitimate government concern, and both the EPA and the Corps play a critical role in regulating, deterring, or punishing the intentional pollution of important waterways.

However, in a disturbing trend of regulatory overreach, these agencies have in recent years utilized irrationally broad interpretations of the Clean Water Act.

Most alarmingly, the EPA and the Corps determined in the 2015 Waters of the United States rule that the term “navigable waters” includes a whole host of places the average person would not reasonably consider to fall under the Clean Water Act’s purview, including vernal pools on grassland.

On Oct. 9, 2015, the 6th U.S. Circuit Court of Appeals stayed official implementation of the rule, pending further review of the court. The court “conclude[d] that petitioners have demonstrated a substantial possibility of success on the merits of their claims” that the rule lacks legal validity.

These broad interpretations resulted in Duarte receiving a cease-and-desist letter from the Corps. The agency alleged he “discharged dredged or fill material … into waters of the United States, without a [required] Department of the Army (DA) permit,” in violation of the Clean Water Act.

In short, the Corps determined Duarte destroyed a wetland without its permission, and that his plowing did not constitute exempted “normal farming practices.”

It did not offer him any opportunity to rebut these claims before demanding he cease all farming activities. Duarte would not be allowed to harvest his $50,000 worth of planted wheat.

More than four years later, he is facing $2.8 million in fines and an estimated minimum of $13 million in “mitigation credits” for his actions. Shockingly, although these fines could destroy his business and put more than 500 employees out of work, they are considered mere “civil penalties.”

Now, Duarte and his lawyers hope the Trump administration will step in to help.

Earlier this year, President Donald Trump directed relevant federal agencies to reconsider their broad interpretations of the Clean Water Act. He deemed the Waters of the United States rule a “massive power grab” and urged a much narrower understanding of “navigable waters” as those larger bodies directly affecting interstate commerce.

Although the sentencing phase of Duarte’s trial is still scheduled to begin Aug. 15, the discrepancy between the president’s directive and the continued pursuit of Duarte’s case by the Department of Justice has not gone unnoticed in Washington, D.C.

Their May 26 letter conveyed their concern that “the congressional intent behind the farming exemptions in the statute is misunderstood,” and noted the Agriculture Committee’s view that Duarte’s actions were traditional farming activity exempted from permit requirements.

Recently, Agriculture Secretary Sonny Perdue expressed his hopes the Justice Department would postpone any further action against Duarte until after the EPA completes its reassessment of the scope of the agency’s jurisdiction.

He further announced his intention to meet with Sessions and EPA Administrator Scott Pruitt about the situation.

Duarte’s case is an unfortunate reminder of just how serious the consequences of regulatory overreach can be to unsuspecting citizens. A prominent fixture of American jurisprudence is the idea that laws should be adequately clear so as to give fair warning about which behaviors are prohibited.

As Paul Larkin of The Heritage Foundation recently observed, the current Waters of the United States rule is a complicated mess of over 2,300 words. It utilizes language without settled common-law or contemporary meaning, and requires a person of ordinary intelligence to decipher complex geographical terms.

Perhaps worst of all, it demands the average person do this with the unforeseeable risk of a multimillion-dollar fine looming over his or her head.

The Trump administration is admirably attempting to scale back the power of these federal agencies. But it still appears—for now, at least—Duarte will become the latest victim of an ever-growing list of federal regulations allowing for the imposition of devastating penalties with little notice.