How a Historical Novel Can Help Us Navigate This Contentious Moment 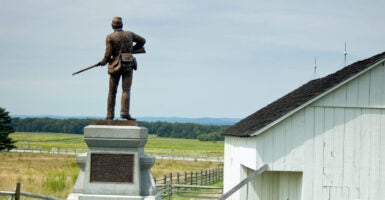 In “Annie, Between the States,” author L.M. Elliott shows the nuance and complexity of living in the Civil War era. Pictured: The 11th New York Infantry Monument marks the site of Pickett’s Charge at Gettysburg National Military Park in Pennsylvania. (Photo: catnap72/Getty Images)

Jean-Marie Bralley is a writer based in Charlottesville, Virginia.

It’s no question that we are at a crossroads in the history of America. More than ever, we are failing to acknowledge, learn from, or accept our past, sins and all.

We have witnessed this tug-of-war debate about whether Confederate statues, as well as those of presidents and abolitionists, belong in public places or in museums.

The same is true regarding how we talk about U.S. history in school curriculums. This cultural melee includes people of goodwill, who truly are seeking justice and equality, as well as those opportunistically seeking control and power.

It is going to be a Herculean task to untangle and clarify this historic time in which we find ourselves. But perspective and wisdom always begin with truly understanding what came before us.

These topics and the current state of the country were continually on my mind as I recently read a young adult novel of historical fiction called “Annie, Between the States,” written by L. M. Elliott in 2004. I think this book should be required reading in our schools.

Not only is “Annie” a sensational literary masterpiece for young adults— engaging, suspenseful, and well-written—it explores the breadth of animating motivations and intentions of the Union and of the Confederacy during the Civil War.

The book shatters the narrative, which is seemingly favored today, that the virtuous liberators belonged only to the North and the evil persecutors only to the South.

How many of us know or remember that there were four slaveholding states in the Union? That Confederate Gen. Thomas “Stonewall” Jackson conducted a Sunday school for slaves and freemen, defying the custom of denying literacy to African Americans? Do we realize the majority of Confederate soldiers were not slaveholders?

All of these historical facts and more are presented by Elliott. Moreover, her titular protagonist, a young Virginian teenager named Annie, symbolizes the turmoil and confused allegiances of the time.

Annie befriends Confederate Gen. Jeb Stuart and is imprisoned as a possible spy by the Union, but she also comes to understand the innate injustice of slavery. She falls in love with a Union soldier while she simultaneously recognizes her love and loyalty to the people of the South.

Elliott skillfully delineates the nuance and complexity of this convulsive time in our history, showing the humanity—that is, the virtues and the failings—of both Northerners and Southerners. The evil of slavery is not diminished, but Annie comes to understand that there is brutality and racism as well as honor and bravery on both sides.

The debate over statues and monuments likely will continue into the foreseeable future. In fact, a “Johnny Reb” statue that had stood for 111 years was just taken down near my home in Charlottesville, Virginia, last month.

In the midst of these tense days, I wish more of us could approach the discussions about how we remember, teach, and memorialize our history with a fuller, more broad-minded analysis of the people and places in their times. I wish we could stop projecting our own mindset onto people of the past and truly appreciate where we came from and where we are going.

Elliot and her heroine, Annie, have a lot to teach us in this regard.