It’s Unwise for Mayors to Embark on Costly Climate Plans. But It’s Also Their Right. 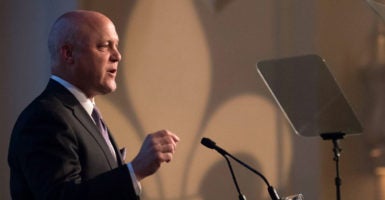 Robert Bellafiore is a member of the Young Leaders Program at The Heritage Foundation.

Since President Donald Trump announced America’s withdrawal from the Paris climate agreement, mayors from across the country have announced a renewed commitment to the agreement, promising to achieve its objectives on their own.

He’s absolutely right—just not in the way he means to be.

To be clear, these policies will be economic and environmental failures, just as Paris is. States and cities committing to climate plans that regulate affordable, dependable power sources out of existence or subsidize uncompetitive energy technologies distort markets and hurt families, businesses, and taxpayers—all for no meaningful climate benefit in return.

But no matter how expensive or inefficient a policy might be, the federal government shouldn’t stop states from implementing it and facing the benefits or consequences. The voters who shoulder the burden of these policies will ultimately determine the fate of the politicians championing them.

The American government was built on the principle of federalism—the distribution of power among different levels of the government, from federal to local.

If the president can’t or won’t act, Americans don’t have to throw their arms up in despair. Instead, they can fight for change, both good and bad, on another level.

Federalism is enshrined in the 10th Amendment, which assigns to the states and the people all powers not assigned to the U.S. or explicitly prohibited.

These mayors’ promises on global warming are a bad idea, but there’s a silver lining: We have good reason to be skeptical that they’ll actually be kept.

In 2007, when President George W. Bush refused to commit to the goals of the Paris climate agreement’s predecessor, the Kyoto Protocol, more than 1,000 mayors promised to achieve the objectives on their own.

When the carbon reduction deadline rolled around in 2012, however, hardly any city had managed to reach its goals.

Likewise, today’s pledges may prove to be nothing more than hot air. If politicians don’t follow through on their promises, they’ll have no one to blame but themselves.

This isn’t the first time since the election that people have advertently proven the effectiveness of local action, even if directed toward the wrong ends.

In the days following Nov. 8, donations to Planned Parenthood skyrocketed.

Donors intended their actions to be a protest against the possibility of Planned Parenthood losing its federal funding. Instead, they revealed why Planned Parenthood doesn’t need federal funding in the first place: If free individuals truly care about an issue, they’ll put their money where their mouth is. And if they don’t care, they won’t donate.

Expecting the federal government to solve every problem simply passes responsibility, and the check, to someone else.

As former Vice President Al Gore rightly put it, “If President Trump won’t lead, the American people will.” If only he could be right for the right reasons.