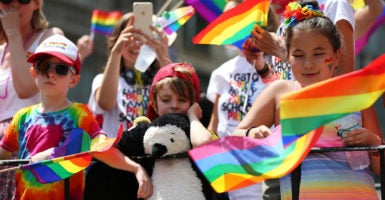 Parents of children in the East Penn School District are not pleased that their children are being showed pro-LGBT videos without their consent. Pictured are school pupils as they participate in the Pride March on June 24, 2018 in New York. (Photo: Anna Sergeeva/ZUMA Press/Newscom)

At East Penn School district, officials don’t just indoctrinate kids — they refuse to show parents how! That’s the outrageous predicament Emmaus families find themselves in after they found out about a weeklong blitz of pro-LGBT videos that was required watching in every homeroom. And here’s the irony: while students were forced to watch them, parents weren’t allowed!

Local moms and dads only found out about the screenings through their kids, not because the administration bothered to inform them. Mike Huff, a parent of one of the students, was furious. “I do not support a publicly-funded school pushing any political or social views on children,” he told administrators. These were “purposeful, planned, indoctrination videos” that go against his family’s values. Yet, when Huff and others flooded the school office, demanding to see what they were showing kids, the response was simple: “No.”

“This was student work; this wasn’t staff work,” Superintendent Michael Schilder insisted. “This was not curriculum… This was student work that needs to be protected from public scrutiny.” But, as most adults pointed out, the “student work” was actually the product of the radical Gay Lesbian Straight Education Alliance (GLSEN), which has been infiltrating schools under parents’ noses for years.

At a school board meeting, East Penn parents lined up to blast the decision to keep the information from parents. “Our community deserves much better than this from the administration…” said mom Michelle Blagbrough. When officials refused to turn over the materials to parents, a group of them contacted Liberty Counsel to sue, if necessary. In a letter to the district earlier this week, attorneys threatened legal action.

“I am writing to request that the East Penn School district immediately provide to all parents requesting them the specific links to the four pro-homosexuality YouTube videos shown by the district to 2,800 high school students at Emmaus High School, as part of the district’s ‘Unity Week’ and ‘Day of Silence’ promotional activities.” If they refuse, Liberty Counsel promises “further action to prevent irreparable harm to the rights of local parents.”

By state law, the district can’t withhold curriculum from parents — a point attorneys drove home in their letter. “The Pennsylvania Administrative Code requires that the district provide parents the opportunity to review all instructional material shown to their children, prior to it being shown… The district has violated this requirement.” Parents, they reiterated, “not agents of the state, including teachers, and certainly not GLSEN or its teacher or student affiliates with the GSA, have the right to direct the upbringing and associations of minor children.”

LGBT activists have relied on a campaign of secrecy in schools for years. But for a public school to openly join those activists in keeping material from the parents of students is an incredible display of arrogance. If you have kids in government schools, protecting them from these influences is a full-time job. Stay vigilant — or better, consider other options!