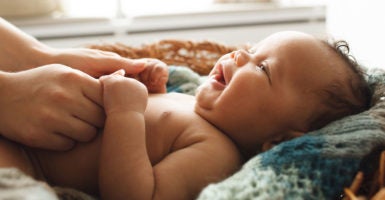 The Pennsylvania Legislature passed a bill that limits the window when women can have abortions from 24 weeks to 20 weeks. (Photo: iStock Photos)

If this has been “one of the most successful Congresses” for the pro-life agenda, then the states deserve some of the credit.

While Republicans were desperately trying to stop President Barack Obama’s runaway abortion train, local leaders were hard at work, making progress on the ground until they had allies back in power. The number of pro-life bills exploded—a wave that helped push the House and Senate to make the issue a No. 1 priority when they took over the reins in Congress.

That momentum continues in states like Pennsylvania, where voters gave the GOP the largest Republican majority in the state House since 1957. Last week, they put it to good use, limiting the window when women can have abortions from 24 weeks to 20 weeks, when scientists know babies can feel pain.

Apart from tightening the timeframe when moms can end their pregnancies, members also banned doctors from dismembering babies in the “barbaric and unnecessary” procedure known as dilation and evacuation. They also required a face-to-face consultation with a medical staffer before a woman can move forward with the procedure.

As usual, these commonsense protections were blasted by the state’s liberals, who complain that Senate Bill 3 “would eviscerate 43 years of due process protections,” according to state Rep. Dan Frankel, D-Allegheny. Fortunately, more leaders were concerned about eviscerating innocent children than the phony precedent created by an activist Roe v. Wade.

State Rep. Madeleine Dean, D-Montgomery, took another tact, insisting that her colleagues shouldn’t pass the bill because no one in the Pennsylvania House or Senate is a doctor.

Does that mean they shouldn’t pass transit proposals if no one’s a bus driver? Or what about sanitation laws? Should they wait until a garbage man runs for state Senate? That’s a ridiculous argument for several reasons—not the least of which is that doctors haven’t cornered the market on what’s moral or safe. And, I guarantee the Legislature heard from plenty of medical professionals in the debate leading up to Wednesday’s vote.

Our hats go off to Pennsylvania’s leaders, who understand that mothers deserve better than the flimsy care and lax standards of Democrats who are more concerned with pleasing Planned Parenthood than protecting women.

Unfortunately for the Keystone State, one of those Democrats is Gov. Tom Wolf, who’s threatened to disregard the will of the people and veto the bill.