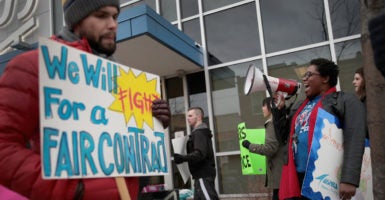 "While I was able to resign my union membership, I was still required to pay a union fee as 'fair share' for union representation," writes Greg Hartnett. Pictured above: Teachers with the ASPIRA charter school network in Chicago hold a rally on March 17, 2017. (Photo: Scott Olson/Getty Images) 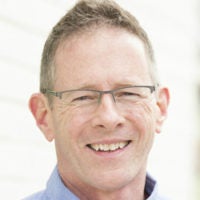 Greg Hartnett is a teacher from Homer-Center School District in Pennsylvania and the plaintiff in Hartnett v. Pennsylvania State Education Association.

One year ago, the Supreme Court ruled that public-sector employees like me, who are not union members, don’t have to pay union fees in order to be employed.

That ruling is already benefiting me and countless others. But unfortunately, Pennsylvania law hasn’t caught up with the times.

For decades, teacher contracts often required even non-union employees to pay fees to a union or lose our jobs—regardless of whether we agreed with the union’s positions. But because of the Supreme Court’s 2018 ruling in Janus v. AFSCME, Council 31, those forced union fees are now unconstitutional.

The ruling was of particular interest to me because in 2017, I, too, filed a lawsuit seeking relief from this unconstitutional practice.

During my 20 years as a public school teacher, I was compelled to send a portion of each paycheck to the teachers union, even though I did not agree with how the union leaders represented me during various negotiations. They blatantly ignored my opinions and worked to maintain their own power.

While I was able to resign my union membership, I was still required to pay a union fee as “fair share” for union representation—representation I did not ask for, want, or need.

In my lawsuit, I joined with three other Pennsylvania teachers to challenge these forced union fees in court.

As my case waited in a lower court, the Supreme Court’s decision in Janus answered the question we were asking: Can teachers—or any public-sector employee—be compelled to fund union activities, many of which are political in nature?

The answer was simple: No. Doing so violates employees’ guaranteed rights to free speech and association.

Despite the court’s ruling, many of my colleagues remain unaware of their new freedom to not pay. Most haven’t heard of the Janus ruling, and union leaders aren’t telling them about it.

As a result, many teachers continue to fund union activities they disagree with, unaware that they have another choice—resign from the union and pay nothing.

While Janus should apply to Pennsylvania law—many union officials have publicly admitted as much—the Supreme Court’s decision did not specifically analyze Pennsylvania law and nullify any of its provisions.

That means any teacher trying to understand their rights would soon encounter a valid state law and, in many cases, a contract with their employer requiring that non-members pay fees.

In fact, the Pennsylvania State Education Association and some of its local unions are continuing to include fair share provisions for non-union members in some of their new contracts right now—even after Janus.

As absurd as it sounds, they are completely ignoring the Supreme Court’s ruling and are knowingly negotiating for unconstitutional provisions in employment contracts.

This is why my own case, Hartnett v. PSEA is still relevant. It’s why we are now appealing to the 3rd U.S. Circuit Court of Appeals.

My case is about bringing the Janus ruling to Pennsylvania and affirming public-sector employees’ rights at the state level. Specifically, we are asking the courts to declare state fair share provisions unconstitutional and block teachers unions from including them in future contracts.

While one court has ruled that the Janus decision doesn’t require this, the facts, as noted above, prove otherwise. And a recent court ruling in California indicates there are legal grounds for my continued appeal.

I take great pride in my work as a teacher to thousands of Pennsylvania students. It’s an honor to have the confidence of both the parents and administrators in Indiana County’s Homer-Center School District where I teach.

It’s been a full year since the Janus decision was handed down, and I believe that workers across the country are benefiting. It’s time for Pennsylvania to catch up.