This School Board Leader Tried to Rig a Public Forum in Favor of Transgender Advocates. That’s Unconstitutional. 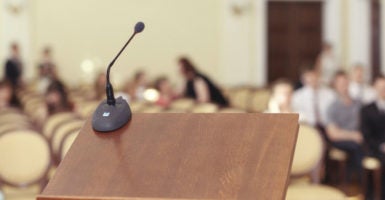 The Supreme Court has ruled that public officials may not “regulate speech in ways that favor some viewpoints or ideas at the expense of others.” (Photo: iStock Photos)

Jared Dobbs is a communications specialist at Alliance Defending Freedom.

Stacking the deck at the casino makes for bad feelings among friends.

Things get more serious when you’re a government official stacking the deck at public forums with speakers in favor of your personal political views. That not only makes for bad public policy—it violates the First Amendment.

The Prince William County Virginia School Board convened last Wednesday to vote on a proposed rule that would undermine the principle of student privacy between the sexes. It would have laid the groundwork for opening up sex-specific locker rooms, showers, and other private facilities to members of the opposite sex.

Many parents have legitimate convictions that maleness and femaleness are essential biological, anatomical attributes, and they would like to openly defend the policy of maintaining privacy between the sexes, despite the claims of gender identity advocates.

Nonetheless, before the meeting, Ryan Sawyers, school board chairman, sent a text to the clerk telling her to frontload a list of favored speakers to comment before those who had already signed up.

This violated local school board rules, which say the public is to speak in the order that each citizen contacts the clerk.

This is particularly significant because at Prince William County Public School board meetings, only 10 to 15 people get to speak before the vote, since initial public comment is limited to 30 minutes. Everybody else has to wait until after the vote to make their views known.

But dishing out political leftovers to one’s opponents and frontloading the initial discussion with allies goes beyond violating local school board policy. It’s flatly unconstitutional.

School board meetings must protect viewpoint neutrality to satisfy First Amendment principles of free speech. If a school board chooses to open a forum for public comment, the process of determining who speaks cannot be determined by the viewpoint of the speaker.

The U.S. Court of Appeals for the 4th Circuit agrees.

In Child Evangelism Fellowship of MD, Inc. v. Montgomery County Public Schools, the majority opinion notes that “‘the state may be justified in reserving [its forum] for certain groups or for the discussion of certain topics,’ subject only to the limitation that its actions must be viewpoint-neutral and reasonable.”

And just last week, the Supreme Court reiterated in Matal v. Tam that government officials cannot “regulate speech in ways that favor some viewpoints or ideas at the expense of others.”

The traditional method of letting people speak in the order they sign up with the clerk is an orderly way to achieve these objectives. But giving the chairman the power to decide who speaks before the vote does not satisfy these criteria.

If the chairman is not bound by a limiting principle, then he has unbridled discretion to determine who can use the coveted 30 minutes of speech. It will be difficult, over time, for him not to hand-pick allies, particularly since he is a Democratic candidate for Congress.

Indeed, the first speaker on the chairman’s list, Danica Roem, is also a political player, a local Democrat recently nominated to run against incumbent Republican Bob Marshall in a Virginia House of Delegates race.

To be clear, after the chairman’s text messages were made public and Alliance Defending Freedom sent a letter to Prince William County Public Schools, the chairman did not stick to his original plan on Wednesday night.

But it remains unclear whether the final speaking order came from a new alternative list he created, or whether he reverted back to school board policy and used the original list of speakers, based on the order that local citizens signed up to speak.

That is precisely the problem. In the American system of ordered liberty, government officials don’t have the power to make that choice. They cannot dish out fast passes for the view they like while relegating opposing views to second-class status.

Rather, if officials choose to set up times for public comment, they must set up an orderly process that respects the free speech of all participants.

All voices should equally receive free speech protection, because our Constitution recognizes that when the government plays favorites, everyone’s freedom flounders.