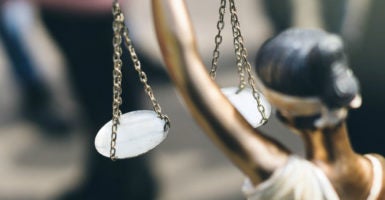 The 5th Circuit ruling allows a Mississippi law to go into effect that protects the religious liberty and conscience rights of those who hold traditional marriage beliefs. (Photo: iStock Photos)

The 5th U.S. Circuit Court of Appeals ruled unanimously on Thursday that a Mississippi law that protects religious liberty and the rights of conscience in light of the redefinition of marriage may go into effect.

In the decision, the circuit court overruled a previous judgment from a district court judge who had declared the Mississippi law unconstitutional for violating the Establishment Clause and the Equal Protection Clause.

But as the circuit court pointed out, the challengers to Mississippi’s law lack standing because they “have not clearly shown injury-in-fact.” In other words, they did not show how the Mississippi law protecting liberty for people who hold to the pre-Obergefell v. Hodges definition of marriage harmed them.

The court explained that the “failure” of the “plaintiffs to assert anything more than a general stigmatic injury dooms their claim.”

While the ruling focused on the lack of standing of the plaintiffs, there are plenty of reasons to rule in favor of the constitutionality of laws like Mississippi’s on the merits.

As Sherif Girgis and I explain in our new book, “Debating Religious Liberty and Discrimination,” there is nothing scandalous about protections for particular views that are at odds with those on which the government acts.

Indeed, as law professor Richard Epstein explains, the Establishment Clause—meant to “knock down state coercion for religion”—can’t be used to invalidate “a statute whose whole purpose was to insulate private parties from any form of coercion.”

So, what does the Mississippi law do? As previously explained at The Daily Signal:

This is a reasonable bill. It protects the consciences of people who hold to the historic definition of marriage in the aftermath of the Supreme Court redefining marriage, and it does so while avoiding the awful outcomes that critics fear. The bill provides that the government cannot punish, fine, or coerce specific people and organizations, in specific contexts. It doesn’t harm anyone.

Other states should follow Mississippi’s lead in protecting religious liberty and the rights of conscience after the redefinition of marriage. So, too, should Congress pass protections at the federal level.

There is great precedent for such protections on the abortion issue, as Girgis and I explain in “Debating Religious Liberty and Discrimination.”

In 1973, just months after Roe v. Wade was handed down, Congress passed the Church Amendment, named for Sen. Frank Church, a Democrat from Idaho.

While Roe shielded the choice to have an abortion, the Church Amendment protected doctors’ and nurses’ choices not to perform one. It provided that health care organizations receiving federal funds could not force their doctors or nurses to perform or assist abortions.

Some 20 years later, Congress passed and President Bill Clinton signed the Coats–Snowe Amendment. It prohibits the government from discriminating against medical students who refuse to perform abortions and medical residency programs that leave out abortion training.

And in 2004, Congress passed the Hyde-Weldon Amendment, which keeps the government from discriminating against health care institutions that don’t offer abortions.

Our law should now do the same on marriage. It needn’t and shouldn’t penalize private associations for their beliefs on this issue. Doing so would make no appreciable difference to the ability of same-sex couples to receive the goods and services they seek, but it would undermine conscience rights for some.

So lawmakers can and should grant a categorical accommodation.

A proposed federal law would do that. Much like the Church, Coats-Snowe, and Hyde-Weldon amendments, the First Amendment Defense Act would protect the freedoms of citizens and organizations who hold a belief at odds with one enshrined by courts.

Protecting pro-life consciences did not violate the Constitution—by establishing a religion or engaging in viewpoint discrimination or otherwise. Nor do laws protecting pacifists. Their only aim is peaceful coexistence in the face of disagreement.

The same goes for the First Amendment Defense Act. It would enact a bright-line rule to keep government from penalizing someone just for acting on her belief that marriage is the union of husband and wife. It would protect people who hold that belief for religious or secular reasons, and it would shield organizations from losing nonprofit tax status, licensing, or accreditation for operating by these beliefs.

But even the First Amendment Defense Act’s categorical protections reflect a careful balance. They protect individuals, nonprofit charities, and privately held businesses, but not publicly traded corporations, or federal employees or contractors in the course of their work.

The First Amendment Defense Act makes clear that it does not relieve the federal government of its duty to provide services, medical care, or benefits to all who qualify. It must simply respect conscience in the course of doing so.

Mississippi has shown the way forward on this issue at the state level. And on Thursday, the 5th Circuit allowed that law to go into effect.

Other states should offer similar protections at the state level, and Congress should do the same at the federal level.

America is in a time of transition. The Supreme Court has redefined marriage, and beliefs about human sexuality are changing.

During this time, it is critical to protect the right to dissent and the civil liberties of those who speak and act in accord with what Americans had always previously believed about marriage—that it is the union of husband and wife.

Good public policy is needed at the local, state, and federal levels to protect cherished American values. Good policy would help achieve civil peace amid disagreement and protect pluralism and the rights of all Americans, regardless of what faith they may practice.