Why Are ‘Customers’ So Angry About This New Book on Marriage and Religious Freedom? 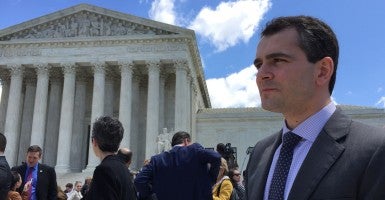 Is the debate about marriage over after the Supreme Court’s June decision to redefine marriage in all fifty states? That’s what some Amazon.com reviewers are insisting after a new book was released last week.

The book, “Truth Overruled: The Future of Marriage and Religious Freedom,” is a roadmap from Ryan Anderson, a senior research fellow at the Heritage Foundation, on how the conservative movement can move forward in promoting marriage and protecting religious freedom after the Supreme Court’s ruling.

“I wrote this book for all Americans. For those who disagree with me, to at least understand the viewpoint of roughly half the nation,” Anderson told The Daily Signal. “For those who agree, to better understand the nature of the debate and the reasons supporting the truth. For those undecided, to get one thoughtful take on what the future should hold.”

As of Saturday, Anderson’s book has received over 120 reviews. It average rank is 3.4 of 5 stars with 40 percent of reviewers leaving a 1 star rating.

As of Sunday, only one of the 49 one-star reviews was a “verified purchase” reviews, which gives potential customers authenticity that the reviewer has purchased the material. By contrast, 35 of the 76 5-star reviews are from verified purchasers. Several of the 1-star reviews insist the “debate is over” and that Anderson’s claims are “a deadly defense of dying worldview.”

A Twitter user known as Str8Grandmother, a LGBT activist, urged her followers to leave “HONEST” reviews.

She tagged another LGBT activist JoeMyGod. At the JoeMyGod blog we found the following comments from a group of LGBT activists that calls themselves the “Flying Monkeys:” Anderson was surprised Amazon approved the reviews too. But he said these activists on the Left aren’t representative: “The one-star reviewers do not represent ordinary liberals,” Anderson said. “Ordinary Americans on the left are honorable and open-minded,” he noted. Consider “San Francisco Amazon Fangirl.” That reviewer gave the book five stars even though “I totally disagree with Ryan Anderson on this crucial issue of individual rights and equality.”

Ilya Shapiro, a senior fellow in constitutional studies at the Cato Institute, also believes same-sex marriage is a constitutional right but found issue with the reviews for Anderson’s book. “I disagree with Ryan’s perspective—and have publicly debated him several times—but he’s always thoughtful and courteous, unlike most of those who agree with me on same-sex marriage who have decided to ‘review’ Ryan’s book here,” Shapiro wrote last week.

Negative reviews morphed from disagreeing with Anderson’s stance to likening him to a Gestapo. Calling the book “fascism 101,” one reviewer posted a photo of likely concentration camp prisoners during World War II. Several people reported this post and the picture, but five days later, Amazon has still not removed it. Others attacked Anderson personally. “Ryan is a sad and bitter loser, who can’t seem to grasp that, he makes no laws,” reviewer Terence Jennings wrote, titling the review “Unmarried virgin.” “He grants no rights or benefits and that his drivel is rehashed talking points that don’t really matter. So, waste your money if you will. The joke will be on you.” Amazon did remove this review.

While officials from Amazon did not return requests for comment, the e-retailer giant states in its review policies that reviews with obscene or distasteful content as well as profanity or spiteful remarks are not allowed and could be removed.

While it’s not the first time Anderson has released a book on marriage—he co-wrote “What is Marriage? Man and Woman: A Defense” in 2012 with Sherif Girgis and Robert George—Anderson said there was not a “well-organized attack” at its launch, primarily because he wasn’t as well known a figure.

But after doing many debates and media interviews, and with a  profile of him appearing on the front page of The Washington Post, Anderson believes the LGBT activists are intentionally targeting him.

“The 1 star reviews came from activists and ideologues,” said Anderson. “It’s a shame they’re so out of touch and unwilling to even consider opposing viewpoints. They do their cause damage.”