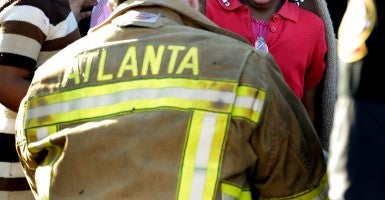 Atlanta Fire Chief Kelvin Cochran was fired on Tuesday by Atlanta Mayor Kasim Reed. Why? Because, on his own private time, Cochran wrote a book expressing his biblical understanding of sexual morality.

At the center of this controversy is whether governments should push those who hold traditional beliefs out of government jobs. The decision by the mayor is out of step with American values of freedom of speech and free exercise of religion and with the ordinary citizen’s desire for peaceful co-existence. The mayor’s action also may violate the First Amendment.

Cochran is a devout Christian and active in his community as a member of Elizabeth Baptist Church, where he serves as a deacon and teacher. In 2013, he wrote and published a book — “Who Told You That You Are Naked?” — to provide guidance to a men’s Bible study group embarking on a study, “A Quest for Authentic Manhood.”

The activists point to only one page in the book which mentions homosexuality as one among many sexual sins from a Christian perspective.

Mayor Reed promptly responded to the activists, issuing Chief Cochran a month-long without-pay suspension, ordering him to undergo sensitivity training, and then—after a month’s investigation—dismissing the chief. At a news conference, Reed summarized his reasons for dismissing the fire chief, “This is about judgment…This is not about religious freedom, this is not about free speech… Judgment is the basis of the problem.”

Yet a month earlier Reed released a statement saying, “I profoundly disagree with and am deeply disturbed by the sentiments expressed in the paperback regarding the LGBT community. I will not tolerate discrimination of any kind within my administration.” But the mayor never pointed to any acts of discrimination from Cochran. He only disagreed with the book the chief wrote.

The mayor also stated that he believes Cochran’s book may leave the city vulnerable to potential for litigation, although it is unclear how this might be the case. In 34 years of service, Cochran has never been accused of discrimination by any employee, and Reed did not release any evidence of discrimination after the month-long investigation.

Reed also said he decided to terminate Cochran because the fire chief didn’t consult him before publishing the book, yet Cochran says he did confer with the city’s ethics officer before publishing the book and was granted verbal permission. Cochran also reported that he gave a copy of the book to the mayor’s executive assistant in January 2014—10 months before the suspension.

All of this suggests that Cochran did everything in his power to follow proper protocol and give the city a chance to review his book before it was published.

Cochran’s firing didn’t need to happen. The Supreme Court has routinely held that government employees have limited free speech rights when the speech of those employees “has some potential to affect the [governmental] entity’s operations.” But “so long as employees are speaking as citizens about matters of public concern, they must face only those speech restrictions that are necessary for their employers to operate efficiently and effectively.”

At the outset, it is obvious that Cochran was speaking in his private capacity (not as a fire chief) and that he was speaking on a matter of public concern (biblical faith and human sexuality). But did his speech interfere with his job?

No one can plausibly claim that Cochran’s speech would interfere with his ability to manage the fire department—his 34 years without incident attests to that, as does the appointment from Obama. Nor should his book dissuade his department from effectively fighting fires—would an Atlanta citizen who is gay be afraid to dial 911 if his house was burning down, simply because he heard about Cochran’s book? Not likely.

The only plausible claim that Reed has is that he might face political heat from gay activist groups if Cochran is retained. Yet this is hardly Cochran’s fault and has almost nothing to do with Cochran’s job description. Upholding Cochran’s dismissal on this basis would set a dangerous precedent for the free speech rights of public employees.

Ordinary Americans—both those in favor of gay marriage and those who oppose gay marriage—understand that public servants shouldn’t be punished for their speech as private citizens. As Cochran summarizes:

The LGBT members of our community have a right to be able to express their views and convictions about sexuality and deserve to be respected for their position without hate or discrimination, but Christians also have a right to express our belief regarding our faith and be respected for our position without hate and without discrimination. In the United States, no one should be vilified, hated or discriminated against for expressing their beliefs.

This case is another example of how some activists are pushing to blacklist those with traditional beliefs. Most Americans don’t like this—only the ideologues do. So while some activists push for this, ordinary citizens, whether they’re for or against gay marriage, do not want the government punishing people over their beliefs about marriage.

We can have a government system of live and let live. Even if government recognizes same-sex relationships as marriages, the government should not punish Americans for their political or religious speech in defense of marriage as a union of husband and wife. Government jobs should not be off limits for any class of citizen including those who believe that marriage is the union of a man and woman and that sex is reserved for marriage.

We all must work to protect the rights of Americans to be free to speak and to act in the public square in accordance with their belief that marriage is the union of a man and woman—whether they are a duck hunter, wedding cake baker or a fire chief.