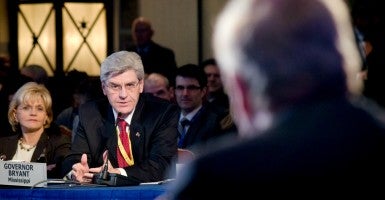 The law prevents discrimination in a manner that is balanced and clear, which left little room for ideological opponents to make wild hypothetical accusations against the bill. (Photo: Flickr/ USDA/CC BY 2.0)

Mississippi Gov. Phil Bryant, a Republican, has signed the Protecting Freedom of Conscience from Government Discrimination Act, a law that guarantees religious freedom in the wake of last year’s activist Supreme Court decision redefining marriage for the country.

The left, big business, and even Planned Parenthood weighed in against the legislation. Mississippi policymakers, reflecting the overwhelming support of the state’s citizens, stood up to the bullying and enacted commonsense religious liberty protection.

The law protects religious beliefs in a precise and balanced way:

Only these specific persons or organizations, and only in these specific contexts, will be protected from government punishment and coercion—whether that coercion might come in the form of penalties and fines, license-stripping, or loss of access to government programs or tax exemptions.

In his signing statement, Bryant noted that the law simply protects individuals against government coercing them against their beliefs and that it does so “in the most targeted manner to prevent government interference in the lives of the people.” As he emphasized—contrary to wild accusations by the bill’s opponents—the law does not take away anybody’s rights and does not challenge the Supreme Court’s same-sex marriage decision.

That’s exactly right. The law prevents discrimination in a manner that is balanced and clear.

That’s exactly right. The law prevents discrimination in a manner that is balanced and clear, which left little room for ideological opponents to make wild hypothetical accusations against the bill, as they had done with Indiana’s religious freedom proposal last year.

This victory should also give a boost to religious liberty provisions under consideration in other states and the First Amendment Defense Act introduced in Congress, which mirrors many of Mississippi’s protections.

Sports bodies, big business, and other state governments have threatened every state considering similar religious freedom legislation with boycotts and relocation. While Georgia and West Virginia folded under the pressure, the people of Mississippi have proven they can stand up to bullies by standing for religious freedom. Bryant, the legislature, and the people have made a wise choice by enacting commonsense policy.