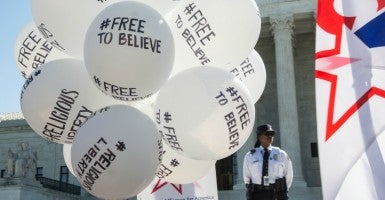 The Supreme Court’s 5-4 decision on Friday redefining marriage across all 50 states will likely have many serious, even unintended, consequences for the rule of law, democratic self-governance, and—in particular—religious freedom.

Before the ink was dry on the court’s activist decision, a columnist for The New York Times was already calling for the end of non-profit tax status for churches, charities, and other religious institutions. Just days earlier, the American Civil Liberties Union urged Congress to “amend” (read: gut) the 1993 Religious Freedom Restoration Act—a commonsense, federal law that protects Americans’ free exercise of religion from unnecessary government interference and one the ACLU lobbied Congress to pass in the first place.

These calls to strip people and institutions of faith—with long-standing legal protections—are outrageous, but not unexpected. Numerous friend-of-the court briefs detailed the potential ramifications of redefining marriage for religious liberty, yet Justice Anthony Kennedy afforded just one paragraph to these considerations, writing in the majority opinion:

[I]t must be emphasized that religions, and those who adhere to religious doctrines, may continue to advocate with utmost, sincere conviction that, by divine precepts, same-sex marriage should not be condoned. The First Amendment ensures that religious organizations and persons are given proper protection as they seek to teach the principles that are so fulfilling and so central to their lives and faiths, and to their own deep aspirations to continue the family structure they have long revered.

The majority graciously suggests that religious believers may continue to ‘advocate’ and ‘teach’ their views of marriage. The First Amendment guarantees, however, the freedom to ‘exercise’ religion. Ominously, that is not a word the majority uses.

We’ve already seen numerous threats against Americans’ freedom to exercise their beliefs about marriage, in how they run their businesses, or serve their communities. Faith-based adoption and foster care agencies have been forced to close their doors, rather than abandon their commitment to placing children in homes with a married mother and father. Numerous photographers, florists, cake makers, farmers, and many others have been hauled into court or fined for simply declining to help plan or participate in a same-sex wedding ceremony.

During oral arguments in the marriage cases, the Obama administration’s solicitor general, Donald Verrilli, acknowledged that religious schools losing their non-profit tax status is “certainly going to be an issue” if they refuse to accept a redefinition of marriage.

Future collisions of same-sex marriage with religious freedom could have at least been minimized had the Supreme Court respected the Constitution and allowed citizens to continue debating the issue and making marriage policy for themselves.

“Had the majority allowed the definition of marriage to be left to the political process—as the Constitution requires,” writes Justice Clarence Thomas in his dissent, “the People could have considered the religious liberty implications of deviating from the traditional definition as part of their deliberative process. Instead, the majority’s decision short-circuits that process, with potentially ruinous consequences for religious liberty.”

Justice Samuel Alito echoed that concern, forecasting a troubling picture of future freedoms for Americans who continue to believe that marriage is the union of one man and one woman:

“I assume that those who cling to old beliefs will be able to whisper their thoughts in the recesses of their homes, but if they repeat those views in public, they will risk being labeled as bigots and treated as such by governments, employers, and schools … By imposing its own views on the entire country, the majority facilitates the marginalization of the many Americans who have traditional ideas.”

But that grim prediction need not become reality. Congress should protect the rights of all Americans to speak and act consistent with the truth about marriage—whether speaking in the “recesses of their homes” or working, serving, or educating others.

The First Amendment Defense Act, sponsored in the Senate by Sen. Mike Lee, R-Utah, and in the House by Rep. Raul Labrador, R-Idaho, would prohibit the federal government from discriminating against any individual, organization, school, or business because they acted in accordance with the belief that marriage is the union of one man and one woman. Specifically, the policy would prevent the government from taking adverse action against those groups in tax policy, employment, licensing, contracting, grants, and accreditation.

Read more: This Bill Would Stop Obama Administration From Punishing People Who Stand Up for Marriage

Similar policies can be pursued in the states. Governors can issue executive orders preventing state bureaucrats from discriminating against citizens who wish to live and act in accordance with the belief that marriage is the union of one man and one woman. State legislatures can, likewise, pass legislation that protects the freedom of Americans to continue witnessing to the truth about marriage.

Even President Obama, in his remarks celebrating the Supreme Court’s ruling, reminded the nation that “Americans of goodwill continue to hold a wide range of views on this issue” and urged citizens to “revere our deep commitment to religious freedom.”

Everyone is free to live and to love as they choose, but no one should demand that government coerce others into celebrating their relationship. All Americans should remain free to run businesses, serve the poor, and educate the next generation in accordance with the belief that marriage is the union of one man and one woman.