Why Economic Freedom and Peace Go Hand in Hand 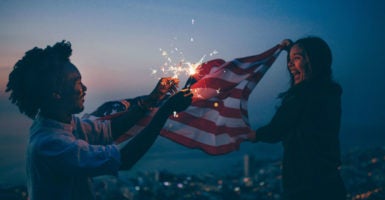 In national contexts, peace and economic freedom often feed into one other, creating the conditions for long-term prosperity and stability. (Photo: iStock Photos)

It’s natural to think that economic freedom and peace should go together.

The standings of more than 150 countries in two independent indexes, The Heritage Foundation’s 2017 Index of Economic Freedom and the Institute for Economics and Peace’s Global Peace Index, track each other rather closely.

For example, North Korea and Venezuela, two countries whose citizens endure privation and a constant threat of violence, sit near the bottom of both indexes.

On the opposite, more positive side of the spectrum are three countries—New Zealand, Canada, and Ireland—that crack the top 10 in both indexes.

The relationship between peace and economic freedom makes sense. A certain level of peace and stability is necessary before markets can develop and grow.

According to the findings of the Global Peace Index, “[I]n low-peace environments, the factors that matter the most are related to well-functioning government [and] low levels of corruption.”

The Index of Economic Freedom recognizes this by including a number of factors related to the rule of law—such as an honest, functional judicial system—in its methodology.

For countries enjoying higher levels of peace, the free flow of information and a sound business environment rise in importance, and economic freedom becomes an important element in maintaining peace and stability by helping societies evolve and grow economically at a manageable pace.

The voluntary nature of interactions in a free market economy ensures that people can move forward, adopting new technologies or patterns of behavior as rapidly as they are able.

Economic change won’t be slowed or prevented by a reactionary government, nor will new ways of living be pushed too soon on an unwilling or unready population. In either case, a typical source of potential conflict and instability is avoided.

So the two go hand in hand. Peace sets the stage for economic progress, and economic freedom ensures the continuing growth in prosperity essential for enduring social stability.