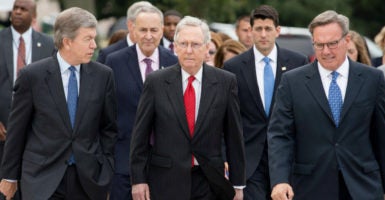 When Congress returns to Capitol Hill on Monday to hammer out a stopgap spending measure, House conservatives plan to introduce a spending safety valve that would eliminate the possibility of a government shutdown.

Congress has struggled for months to reach a spending agreement.

As the end of the fiscal year approaches and government’s spending authority expires Oct. 1, lawmakers have opted to pass a temporary funding extension. Known as a continuing resolution, that measure will extend spending authority into December and requires Congress to revisit the issue shortly before Christmas.

Now, Rep. Jim Jordan, R-Ohio, chairman of the House Freedom Caucus, and Rep. Mark Meadows, R-N.C., a founding member of the caucus, say they will introduce an amendment to that short-term spending bill.

The amendment would trigger an automatic, 40-day extension of government funding if Congress fails to pass a long-term spending bill in December, during a lame-duck session between the Nov. 8 election and the beginning of the new Congress in January.

“I’m trying to give as much flexibility [as possible] to our leadership and appropriators, while at the same time realizing that a potential [government] shutdown should not be the focus of any conversation,” Meadows told The Daily Signal.

“This 40-day extension amendment would allow us to negotiate in good faith,” he said.

The Freedom Caucus considers itself a group of the House’s most conservative members. The new proposal is part of conservatives’ effort to be part of a process that already is moving quickly in the Senate.

Majority Leader Mitch McConnell, R-Ky., introduced the Senate version of that legislation Thursday, over complaints from some in his party that it doesn’t include conservative policy proposals.

“There have been broad requests for a clean continuing resolution,” McConnell said, referring to the fact that the measure has no policy riders tacked on to draw votes. “So that’s what I’ve just offered. It’s the result of many, many hours of bipartisan work across the aisle.”

McConnell’s unwillingness to fight in the Senate puts conservatives at an early disadvantage in the House, Rep. Bill Flores, R-Texas, told The Daily Signal on Friday:

Unfortunately, Senate Majority Leader Mitch McConnell is caving in to this irresponsible behavior by surrendering important conservative policies while allowing liberal interest riders to be attached to government funding.

The view of Flores, chairman of the Republican Study Committee, the House’s largest GOP caucus, carries weight. Some of his fellow House Republicans complain that they didn’t have a say in negotiations.

Earlier in September, before the party reached a unified agreement on spending levels, McConnell announced he was working with the White House and Senate Democrats to reach a deal.

A temporary fix, the Senate measure extends federal funding at the current $1.07 trillion level until Dec. 9. That timetable sets up another fight over spending during the lame-duck session after the election.

The Senate’s legislation also includes relief funds for victims of the flooding that battered Louisiana in August and money to combat the Zika virus that has spread in the South all summer.

It does not contain a provision that would keep money meant to fight the Zika virus from flowing to the nation’s largest abortion provider, Planned Parenthood. Democrats torpedoed three earlier Zika bills that contained the prohibition.

Democrats want Republicans to include funds to address the Flint water crisis in the stopgap spending bill. Their request comes months after President Barack Obama publicly drank a glass of water in May to reassure residents of the Michigan town that the public health crisis was over.

Raising the possibility of a government shutdown for lack of a budget deal to fund the government, the ranking Democrat on the Appropriations Committee, Sen. Barbara Mikulski of Maryland, called on her colleagues “to vote against” the legislation because it didn’t contain money for Flint.

The Senate’s continuing resolution doesn’t contain any language barring the White House from relinquishing U.S. control of ICANN, the nonprofit that functions as the directory of the internet by curating website domain names.

Sen. Ted Cruz, R-Texas, said he was “profoundly disappointed” in McConnell’s final spending bill. The Texas senator had quarterbacked an effort to stop the transfer of ICANN to an international body for more than a month.

The Senate recessed after introduction of the spending measure and it’s not clear when, or if, it will pass.

That could be to the benefit of Democrats. If the process drags on, Republican senators considered vulnerable on Election Day are kept on Capitol Hill and off the campaign trail.

“I would’ve thought we’d be done by now,” a senior GOP aide told The Daily Signal. “But the Senate has just stalled and stalled. From my perspective in the House, it looks like [the Democrats] are trying to shut down the government.”

By law spending bills must originate in the House, but House Speaker Paul Ryan, R-Wis., appears to be waiting on the Senate to send over its version of the continuing resolution. After months of infighting among House members, Ryan predicted a vote on the Senate measure would be “low drama.”

House factions have clashed all year over how to fund the government, with conservatives conceding on every point.

They originally opposed any bill that exceeded the $1.04 trillion spending limits established in the 2011 Budget Control Act and allowed lawmakers to move major legislation during the lame-duck session.

Conservatives fear the lame duck because it provides an opportunity for outgoing—and thus unaccountable—members of Congress to legislate.

Recently, however, Flores and several members of the House Freedom Caucus told GOP leadership that they could concede on both points in exchange for additional screening for Syrian refugees and a stop to the ICANN transition.

Though conservatives said those “sweeteners” would be enough to help them swallow a spending bill they loathe, Democrats decried both as “poison pills.” Neither made the cut in the Senate bill.

“That doesn’t really give conservatives hope for anything,” a second GOP aide told The Daily Signal. “And if we’re not getting anything now, how are we going to get anything better in the lame duck?”

Unable to add anything to the legislation so far, conservatives remain dissatisfied. If that doesn’t change, Republican leadership likely will have to seek Democrat votes to pass the short-term spending measure out of the House.