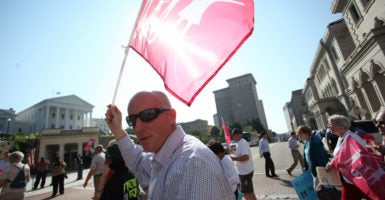 Protesters rally outside the U.S. Court of Appeals for the 4th Circuit in Richmond, Virginia, after oral arguments in a 2014 case in which the court struck down Virginia's ban on same-sex marriage. (Photo: Scott P. Yates/ZumaPress/Newscom)

The federal appeals court deciding the constitutionality of President Donald Trump’s travel ban was once reliably conservative. But it underwent a transformation during the Obama administration, and Democratic appointees now outnumber Republican appointees 2 to 1.

A New York Times Magazine article in March 2003 vividly described the Richmond, Virginia-based U.S. Court of Appeals for the 4th Circuit as the “shrewdest, most aggressively conservative federal appeals court in the nation.”

“It is confident enough to strike down acts of Congress when it finds them stretching the limits of the federal government’s power and hard-headed enough to rule against nearly every death-row defendant who comes before it,” the Times wrote.

But as it hears oral arguments on Trump’s revised travel ban Monday, the 4th Circuit has a higher percentage of Democratic appointees than even the San Francisco-based 9th Circuit, a court with a liberal reputation that Trump frequently has spoken out against.

“There has been a transformation of this court without much notice and without much difficulty,” said Kevin Walsh, a University of Richmond law professor who clerked for Paul V. Niemeyer, a current 4th Circuit judge who was appointed by President George H.W. Bush.

The 4th Circuit has left its mark on some important recent cases.

Within the past year, the appeals court overturned North Carolina’s voter identification law and sided with a transgender teenager over a battle to use a boys’ restroom.

In a 2014 case, a three-judge panel of the 4th Circuit — consisting of two judges appointed by a Democrat and another nominated by President Bill Clinton, then renominated by President George W. Bush — upheld the legality of tax subsidies provided to Americans to pay for health insurance under Obamacare. 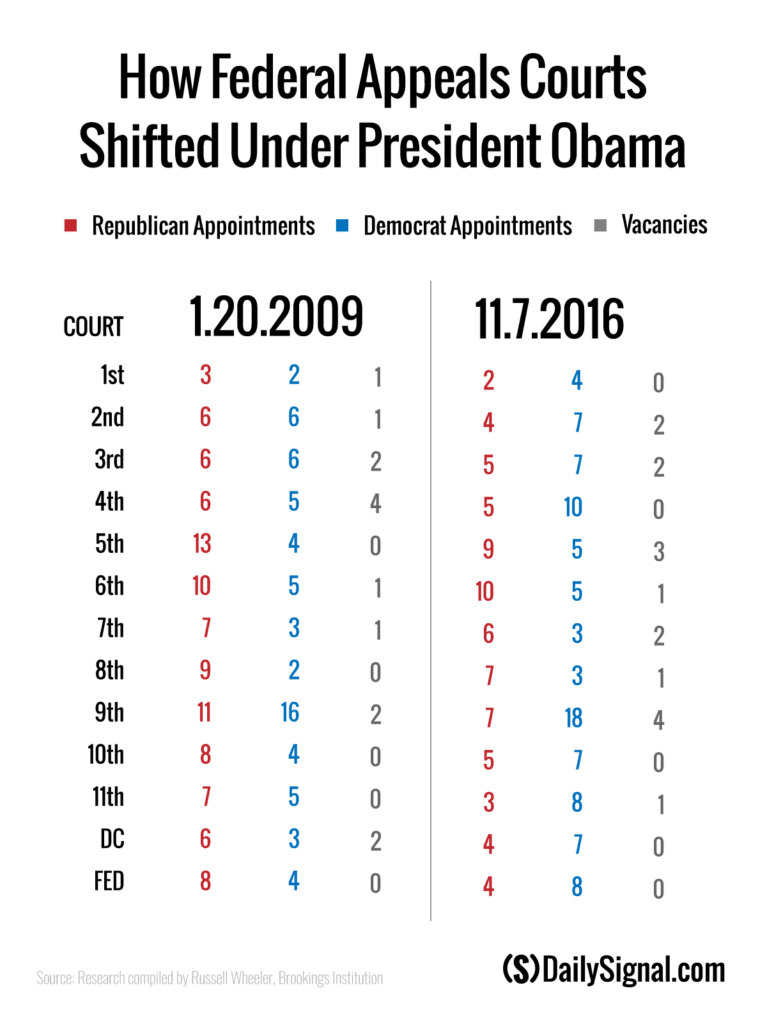 The 4th Circuit’s transformation will be tested Monday when the court’s full roster of judges hears the oral arguments on the Trump administration’s revised travel ban.

In March, after a federal judge halted the first version of his executive order, the president issued a new one to bar entry, for 90 days, to those from six terrorism-plagued, Muslim-majority countries who never before have come to America.

Federal judges in Maryland and Hawaii quickly blocked major sections of the president’s revised order, again preventing the administration from implementing it.

So while the 4th Circuit is taking the Maryland case, the 9th Circuit will hear the appeal from the Hawaii district court May 15.

Signifying the importance of the case, the 4th Circuit decided to bypass the traditional three-judge panel — the construct that usually hears federal appeals court cases — in favor of a so-called en banc hearing, which includes all the court’s judges.

While legal experts expect the case ultimately to be decided by the Supreme Court, appeals courts have the final say in most matters of federal law.

The Supreme Court reviews roughly 75 cases a year, compared to more than 55,000 cases that the nation’s 13 circuit courts (or federal courts of appeals) heard last year.

This disparity exists because the Supreme Court accepts only 1 percent of the cases submitted to it.

“This is something that people don’t appreciate,” said Walsh, who also clerked for the late Supreme Court Justice Antonin Scalia. “There are only so many cases that go up to Supreme Court each year. For all other cases, the last word in the federal system comes from these courts of appeals. So the 4th Circuit is a very important court.”

Walsh and other legal experts say they doubt Obama deliberately reshaped the 4th Circuit as a matter of strategy. They say he was simply taking advantage of an opportunity.

In 2009, Obama inherited 54 openings in the lower federal courts — district and circuit. That included four vacancies in the 4th Circuit, more than any other appeals court.

Today, nine of the 13 circuit courts have a majority of justices appointed by a Democrat, compared to only one when Obama took office.

“The fact the 4th Circuit has taken a liberal turn is not surprising considering how many judges President Obama got to put on that court,” said Elizabeth Slattery, a legal fellow at The Heritage Foundation. “I don’t have a sense the 4th Circuit was a high priority for Obama. It was just there was a large number of vacancies, and he took advantage of that.”

Trump has an opportunity to put his stamp on the lower federal courts, which currently have 121 vacancies. Trump has submitted one nominee for those openings so far.

But unless things change, the makeup of the 4th Circuit won’t shift under Trump because the court has no vacancies.

Russell Wheeler, an expert on judicial nominations at the Brookings Institution, says that a court’s balance of Democratic and Republican appointees is not necessarily an indicator of how a court rules on cases.

He notes that Republican-appointed district judges already have voted against Trump’s travel order in previous rulings.

“The party-of-appointing president is hardly a sure-fire predictor of decisions, certainly of any one judge’s decision in any single case,” Wheeler told The Daily Signal, adding:

In the aggregate, though, there are some fairly consistent if small differences. The reasons the differences aren’t greater is because judges by and large take their role seriously. When the law is clear, the outcome is equally clear, and that’s most of the cases. When the statute and precedents are more ambiguous and allow of more than one reasonable interpretation, judges tend to some degree to fall back on their own notions of sound public policy.

Allison Orr Larsen, a law professor at the College of William and Mary, clerked for one of the 4th Circuit’s leading conservative voices, J. Harvie Wilkinson III, who remains on the court. Though the court isn’t the conservative staple it once was, Larsen said, it still maintains a serious, collegial reputation.

Indeed, one feature of the court has not changed, she said. As a matter of tradition, its judges rise from the bench to shake lawyers’ hands after oral arguments.

“Gone are the days when it was safe to call the 4th Circuit a reliably conservative court,” Larsen told The Daily Signal. “But what remains consistent is that the 4th Circuit still prides itself on its reputation for collegiality, and I know this [travel ban] case will be thoughtfully deliberated by all the judges, regardless of who appointed them to the bench.”