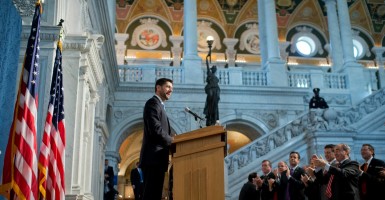 'All I can say is we will not be cowed,' House Speaker Paul Ryan tells fellow Republicans in the Great Hall of the Library of Congress. (Photo: Tom Williams/CQ Roll Call/Newscom)

Paul Ryan doesn’t want a time machine. Instead, the recently elected House speaker urges Republicans to offer their own legislative agenda rather than try to “time-travel back to 2009” and reverse President Obama’s policy victories.

In his first major speech since picking up the gavel as the House speaker, Ryan on Thursday outlined the problems he sees facing the nation and unveiled his vision to fix them.

Ryan, speaking at the Great Hall in the Library of Congress, told fellow Republicans that “to save the country,” winning the White House is key.

Toward this end, Ryan said “the number-one goal for the next year is for conservatives to put together a complete alternative to the left’s agenda.”

The Wisconsin Republican accused Democrats of attempting to “slice and dice the electorate” in years past by “demonizing” Republicans and “polarizing” debate. He pushed his party to focus instead on winning policy solutions rather than political victories in 2016.

True to form, the policy wonk and former chairman of the tax-writing Ways and Means Committee called for drafting a “tax code that all of us can live by.” This simpler code, Ryan said, would take seven income tax rates and “collapse them to two or three.”

Ryan said he wants to close tax loopholes “and use that money to cut tax rates for everybody.”

Looking north, Ryan also hinted at a tax cut for small business. The speaker praised Canada for “taxing their small business at 15 percent” while questioning why, in the U.S., “the top tax rate on successful small business is effectively 44.6 percent.”

After giving a shout-out to his replacement, Ways and Means Chairman Kevin Brady, R-Texas, Ryan rallied Republicans for the fight to reform “the fiercely defended” status quo.

“All I can say is, we will not be cowed,” he said. “We are not here to smooth things over. We are here to shake things up.”

In addition to giving the American people “a raise” by cutting taxes, Ryan said, he wants to slash the cost of living by scrapping President Obama’s landmark health care law. “There are many things to do, but most urgent is to repeal and replace Obamacare.”

Hours before the Senate was set to vote on a reconciliation bill that would gut the heart of the Affordable Care Act, Ryan promised to renew and expand upon that effort during the upcoming presidential election year.

Though Republicans have voted more than 50 times to repeal Obamacare, Ryan’s replacement plan would be the first of its kind.

“We think this problem is so urgent that, next year, we are going to unveil a plan to replace every word of Obamacare,” he said.

The speaker also voiced support for an “individual tax credit to help people pay for premiums—giving more to the old and sick.”

3. Jump-starting and returning to the workforce “millions of people stuck in neutral” by enacting entitlement reform.

Long a supply-side disciple of the late Jack Kemp, Ryan criticized welfare as an impediment to growth. He characterized welfare programs as “holding people back—because, under the law, the minute you start to make real money, these benefits start to disappear—and fast.”

Ryan argued that a generous welfare program provides a powerful disincentive to work, saying “we are trapping people in poverty.”

The speaker called for expanding the welfare work requirement passed in 1996 that requires beneficiaries to search for employment and pursue job training. He also said he wants Republicans to decentralize the entitlement process by letting states and localities “try different ideas.”

“Six million people who have no choice but to work part-time, 45 million people living in poverty,” Ryan said of the current landscape. “Conservatives need to have an answer to this—because we do not write people off in this country. We just don’t.”

4. Insisting that Congress sign off on comprehensive trade agreements.

Reminding his audience that “96 percent of the world’s people” live outside the U.S., Ryan said the country must do more to engage in international trade.

The speaker said the House will consider a trade agreement in the coming year to “tear down barriers to American exports.”

Singling out President Obama’s Trans-Pacific Partnership, Ryan said Republicans should make sure any such trade pact is “a fair deal” before “we sign up for any agreement.”

There won’t be free and fair trade, unless we work for it. China is out there every day pushing for crony capitalism. So it all comes down to this question: Are we going to write the rules of the global economy—or is China?

Under the Obama administration, Ryan said, warnings from the U.S. have become “the hollow protests of a has-been,” while the Islamic State terrorist group, or ISIS, has grown into “a serious threat.”

“We need a strategy to defeat it,” he said.

A budget hawk, Ryan called for “building a 21st-century military” but cautioned against “pouring more money into the Pentagon.”

Rather, Ryan said, he wants to “reform” the Pentagon. He plugged efforts in that direction from House Armed Services Chairman Mac Thornberry, R-Texas, the only congressman other than Brady whom the speaker highlighted by name.

“We need to strengthen both our economy and our military to show the world that freedom works,” Ryan said. “And when we do, the world will see a confident America once again.”