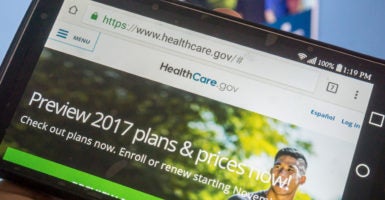 “Congress needs to follow through on the promises they have made over the past nine years to eradicate Obamacare,” says Penny Nance, president and CEO of Concerned Women for America. (Photo: Richard B. Levine/Newscom)

Despite Republicans’ inability to repeal Obamacare, President Donald Trump and some conservative leaders have not given up on calling for renewed efforts to repeal or reform the law.

“There appears to be widespread agreement among congressional Republicans that moving on from Obamacare is bad policy and bad politics,” said Dan Holler, vice president for Heritage Action for America, the lobbying affiliate of The Heritage Foundation.

On Twitter, Trump has been vocal about his intentions to continue reforming health care.

Bob Corker gave us the Iran Deal, & that's about it. We need HealthCare, we need Tax Cuts/Reform, we need people that can get the job done!

Senate Republicans attempted to use a procedure known as budget reconciliation to dismantle Obamacare because they would need only 51 votes to pass a bill with Vice President Mike Pence able to break a tie.

However, in a July 28 Senate vote, three Republicans—Lisa Murkowski of Alaska, Susan Collins of Maine, and John McCain of Arizona—blocked what lawmakers dubbed the “skinny repeal” of Obamacare.

A conservative Senate aide told The Daily Signal in an email that the law could be repealed next year.

“The most likely chance for Obamacare repeal right now is for tax reform to pass this winter, pass a new budget resolution in the spring, and then repeal Obamacare next summer,” the aide said.

Trump tweeted Tuesday that he would be using his executive powers to address Obamacare regulations.

Since Congress can't get its act together on HealthCare, I will be using the power of the pen to give great HealthCare to many people – FAST

The president was expected to sign an executive order Thursday to permit small businesses or individuals to join forces to purchase health insurance plans sold across state lines, the Washington Examiner reported.

Penny Nance, president and CEO of Concerned Women for America, told The Daily Signal in an email that her organization would support efforts to repeal Obamacare next year.

“Congress needs to follow through on the promises they have made over the past nine years to eradicate Obamacare and redirect taxpayer money from Planned Parenthood to federally qualified health centers, which see more patients and provide a greater range of health care than Planned Parenthood ever has or will be able to do—all without forcing taxpayers to fund abortion,” Nance said.

I called Chuck Schumer yesterday to see if the Dems want to do a great HealthCare Bill. ObamaCare is badly broken, big premiums. Who knows!