Religious Freedom, Infrastructure Among Trump’s Plans for Next 100 Days 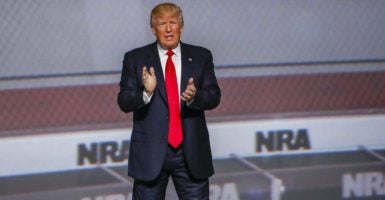 After wrapping up his first 100 days in the White House on Saturday, President Donald Trump plans to hit a new set of issues, including religious liberty, tax reform, and school choice, a White House official told The Daily Signal.

She said Trump would prioritize supporting the military and veterans, as well as school choice for parents frustrated with failing public schools.

“Keep your eyes open for religious liberty,” Ferré said. “It’s going to be an issue. The president made a commitment about the Johnson [Amendment] and I think he’s going to keep that commitment.”

The Johnson Amendment, named for Sen. Lyndon Johnson of Texas years before the Democrat became president, restricts churches from engaging in political expression at the risk of losing their tax-exempt status.

Trump said during the campaign and at the National Prayer Breakfast earlier this year that he was committed to doing away with the rule. Legislation exists to do so. However, many conservatives have urged the president to go further in an executive action to protect religious expression.

Regarding specifics on what action Trump would take on religious freedom, Ferré said only: “Stay tuned.”

This past week, the administration rolled out a tax reform plan to reduce rates and eliminate specific deductions. Trump also announced discussions with the leaders of Canada and Mexico on renegotiating the North American Free Trade Agreement. These will be high priorities in coming months, Ferré said.

She said the White House continues to work on a proposal to repair the nation’s highways, bridges, airports, and other infrastructure, which Trump previously has said would be leveraged by private funds.

“Our infrastructure is in dire need and as a developed nation and the leader of the free world, we are the most behind when it comes to investment in infrastructure,” Ferré said. “We know that we need at least $1 trillion to be able to improve our infrastructure and bring it up to speed, and we have a lot of foreign competition in that regard.”