Legislation Would Curb Restrictions on Political Speech in Churches 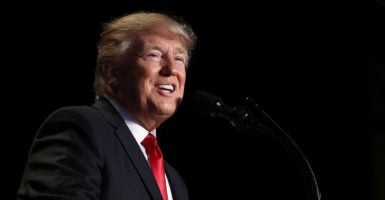 President Donald Trump speaks at the National Prayer Breakfast on Feb. 2 in the District of Columbia. During his remarks, Trump pledged to get rid of the Johnson Amendment. (Photo: Win Mcnamee/ZUMA Press /Newscom)

Congress is taking aim at a 1950s-era law that restricts the free speech of churches and other nonprofits after President Donald Trump recently condemned it.

“The IRS has used the Johnson Amendment to silence and threaten religious institutions and charitable entities,” @CongressmanHice says.

Trump pledged at the National Prayer Breakfast earlier this month, “I will get rid of, and totally destroy, the Johnson Amendment and allow our representatives of faith to speak freely and without fear of retribution.

Rep. Jody Hice, R-Ga., was a pastor for 25 years before serving in Congress, which is one reason he favors doing away with the Johnson Amendment. The law threatens the tax-exempt status of nonprofits, including churches, for engaging in certain political speech.

“For too long, the IRS has used the Johnson Amendment to silence and threaten religious institutions and charitable entities,” Hice said in a public statement. “As a minister who has experienced intimidation from the IRS firsthand, I know just how important it is to ensure that our churches and nonprofit organizations are allowed the same fundamental rights as every citizen of this great nation.”

Hice and House Majority Whip Steve Scalise, R-La., announced their bill to repeal the law the same day Trump pledged to at the National Prayer Breakfast.

Repealing the Johnson Amendment was included in the GOP platform adopted at the 2016 Republican National Convention that nominated Trump.

The bill would amend the U.S. tax code to allow 501(c)(3) nonprofit organizations to speak out on political matters so long as the commentary is made in the ordinary course of the carrying out of a group’s tax-exempt purpose, and as long as no expenditures are made to promote the message that might relate to a candidate. Sen. James Lankford, R-Okla., the co-chairman of the Congressional Prayer Caucus, has a companion Senate bill, which he said is crafted to ensure more political speech rights, but also won’t allow churches and nonprofits to become political action committees.

“The Free Speech Fairness Act is needed to prevent government intrusion and suppression of free speech by removing a restriction on speech that has existed since 1954,” Lankford said of his bill in a public statement. “The First Amendment right of free speech and right to practice any faith, or no faith, are foundational American values that must extend to everyone, whether they are a pastor, social worker, or any charity employee or volunteer.”

However, Rob Boston, spokesman for Americans United for Separation of Church and State, insisted repealing the Johnson Amendment could unleash money in politics and corrupt the purpose of churches.

“This is an issue closely identified with the religious right, but it would affect every organization with 501(c)(3) status, not just houses of worship,” Boston told The Daily Signal in phone interview. “You might see sham nonprofits start up to funnel money to campaigns. Tax-exempt status is a benefit, but it does come with conditions.”

Boston said this is a question of bad policy rather than a constitutional matter.

“I don’t think [getting rid of the Johnson Amendment] would be an Establishment Clause violation unless the repeal was limited to houses of worship,” Boston said.

A leaked draft executive order from the White House showed the Trump administration was considering an inclusive order to recognize the right to religious expression, not just the right to worship. Once this was reported, several liberal groups stepped up to oppose the action.

A concern to some conservatives is that Trump will attempt to address the Johnson Amendment matter through an executive order, while ignoring other significant religious freedom concerns.

Melanie Israel, a research associate with the DeVos Center for Religious and Civil Society at The Heritage Foundation, told The Daily Signal in a statement:

Should Trump issue an executive order that only addresses the Johnson Amendment, it would be a tremendous disappointment because the Johnson Amendment cannot be fully addressed by executive order and must ultimately be repealed by Congress. In the meantime, there are high-priority items that can be fixed by the text of the draft executive order earlier this month. Trump should move quickly to make good on the commitment that his administration will do ‘everything in its power’ to protect religious liberty. The draft copy of the leaked executive order is a good, lawful public policy that would ensure that the public square remains open to all religious voices, including those whose voices differ from the government’s view.

The Johnson Amendment was named after then-Sen. Lyndon B. Johnson, a Texas Democrat, in 1954. Johnson was the Senate minority leader at the time, and he and other lawmakers were concerned 501(c)(3) nonprofit groups would get involved in the elections on behalf of their opponents.

Just before the Senate’s summer recess, Johnson, who would go on to become vice president and later president, pushed through an amendment to rescind a charitable nonprofit’s tax-exempt status if such an organization—including churches—campaigned for or against a political candidate.

>>>A Pastor Fights Against Government Restrictions on Political Sermons

The text of the House and Senate bills protect liberal and conservative groups and churches of any leaning, said Travis Weber, director for the Center for Religious Liberty at the Family Research Council.

“This loosens up simple speech on churches or environmentalist nonprofits or other groups,” Weber told The Daily Signal. “Some might seize on this and say this repeal would be good for just Republicans or for Christian conservatives, but they aren’t looking at the law to see who it protects.”