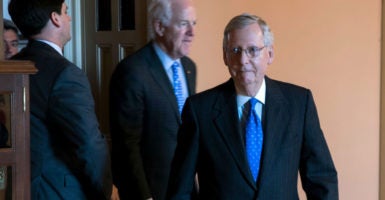 The successful bid by Majority Leader Mitch McConnell, R-Ky., to invoke the nuclear option means waiver of the 60-vote threshold to end debate on Supreme Court nominee Neil Gorsuch. Just one vote with 51 senators voting in the affirmative will be required to confirm Gorsuch.

Republicans hold a majority of 52 seats in the 100-seat Senate.

A final confirmation vote for Gorsuch is expected Friday night.

There will now be up to 30 hours of debate prior to the vote to confirm @GorsuchFacts. He will be our 9th #SCOTUS Justice by tomorrow night.

“This is the latest escalation in the left’s never-ending judicial war, the most audacious yet,” McConnell said on the Senate floor of Democrats’ intention to mount a filibuster to block Gorsuch’s confirmation. “And it cannot and will not stand.”

Trump nominated Gorsuch, a judge on the U.S. Court of Appeals for the 10th Circuit, to fill the Supreme Court seat left vacant by the death of Justice Antonin Scalia in February 2016.

In 2013, Democrats used the “nuclear option” to abolish the filibuster on most presidential nominees, except for nominees to the Supreme Court.

McConnell cited this precedent as grounds for triggering the nuclear option to confirm Gorsuch, but warned Democrats not to invite such drastic measures in the future. The filibuster as a tool for the minority to block legislative action remains intact.

What Democrats are doing will be the first, and last, successful partisan filibuster of a #SCOTUS nomination in the history of the #Senate.

A brief history of the ‘Scorched-Earth Ideological Wars’ over Judicial Nominations by #Senate #Democrats. #SCOTUS https://t.co/ZPi6tZSPBI

Senate Rule 22, requiring 60 votes to end debate on nominees, has not changed, said Rachel Bovard, director of policy services at The Heritage Foundation and a former Senate aide.

“The rules aren’t changed. The way the Senate operates on precedent is changed,” Bovard said in an interview with The Daily Signal.

“Literally nothing changed today,” the aide said. “Starting in 2013, all presidential nominees have needed just 51 votes to end debate. None have needed 60. That is still true after today.”

“The nuclear option violates the Senate’s standing rules, which require 60 votes to overcome a filibuster, by setting a precedent for confirmation of Supreme Court nominees at a majority threshold,” Bovard said in an earlier interview. “If the Senate actually wanted to change its standing rules, 67 votes would be required.”

In October, Sen. Tim Kaine, D-Va., predicted his party would “change the Senate rules” to confirm a ninth Supreme Court justice if Democrats won control of the upper chamber in November.