Long Before Neil Gorsuch, Judges Had to Be Liberal Enough for Chuck Schumer 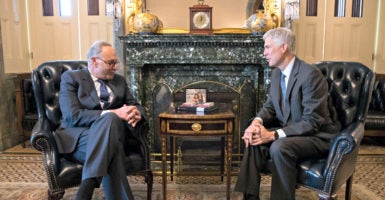 Senate Minority Leader Charles Schumer arguably telegraphed his opposition to Neil Gorsuch as the next Supreme Court justice almost 16 years ago when, as a freshman Democrat from New York, he broke what he called a taboo to say the Senate publicly should make ideology a factor in confirming judges.

Today, Schumer is the Senate’s top Democrat and is leading the charge against President Donald Trump’s first high court nomination.

Schumer not only is the Senate minority leader but a senior Democrat on the Judiciary Committee that will begin hearings Monday on Gorsuch and decide whether to send his nomination to the Senate floor for a confirmation vote.

The New York Democrat applied the ideology test during the two terms of President George W. Bush’s administration. He also made his opposition to Gorsuch clear in a press conference March 15, where he and other Senate Democrats invited plaintiffs to accuse Gorsuch, a judge on the 10th U.S. Circuit Court of Appeals, of making the wrong ruling.

When it comes time to rule, when the chips are down, Judge Gorsuch sides w/ the powerful few over Americans trying to get a fair shake.

But Schumer, elected to the Senate in 1998, introduced his philosophy on using ideology in a New York Times op-ed in June 2001.

“For one reason or another, examining the ideologies of judicial nominees has become something of a Senate taboo,” the new senator wrote. “In part out of a fear of being labeled partisan, senators have driven legitimate consideration and discussion of ideology underground. The not-so-dirty little secret of the Senate is that we do consider ideology, but privately.”

“If the president [then George W. Bush] uses ideology in deciding whom to nominate to the bench, the Senate, as part of its responsibility to advise and consent, should do the same in deciding whom to confirm,” Schumer wrote. “Pretending that ideology doesn’t matter—or, even worse, doesn’t exist—is exactly the opposite of what the Senate should do.”

In another Times op-ed just last month, Schumer criticized Gorsuch for not saying during a private meeting what his opinion was of certain cases, and asserted that, with Trump as president, Gorsuch will have to clear a higher hurdle than previous Supreme Court nominees:

Given the administration’s disdain for the judiciary, any nominee to the Supreme Court, particularly by this president, must be able to demonstrate independence from this president. The bar is always high to achieve a seat on the Supreme Court, but in these unusual times—when there is unprecedented stress on our system of checks and balances—the bar is even higher for Judge Neil M. Gorsuch to demonstrate independence.

Schumer, along with 11 other Democrats still in the Senate today, voted to confirm Gorsuch in 2006 to the appeals court position.

Schumer wrote that Gorsuch “refused to answer” his questions about past cases such as Citizens United and Bush v. Gore, and his view on the Emoluments Clause of the Constitution, because such answers might bias him in cases going forward.

“Judge Gorsuch must be far more specific in his answers to straightforward questions about his judicial philosophy and opinions on previous cases,” Schumer added. “He owes it to the American people to provide an inkling of what kind of justice he would be.”

Schumer applied his ideology test regarding specific issues to numerous times during the Bush administration.

In 2003, Schumer accused Bush’s nominee to the 5th U.S. Circuit Court of Appeals, Charles Pickering, of opposing civil rights. The Senate Judiciary Committee in March 2002 voted 10-9 to block the nomination, when the Senate was under Democratic control. Bush renominated Pickering in January 2003 after Republicans recaptured the Senate, but Democrats filibustered the nomination. Even after Bush eventually recess appointed Pickering in January 2004, Democrats continued the filibuster, and Pickering withdrew his name from consideration in December 2004.

“This administration wants the courts to become the sword that destroys those rights,” Schumer said in a statement at the time. “And don’t think this stops with Judge Pickering. He’s just the tip of the iceberg.”

Bush nominated Miguel Estrada in 2001 to serve on the U.S. Circuit Court of Appeals for the District of Columbia. Schumer filibustered the nomination seven times. After 28 months, Estrada withdrew.

Schumer called Estrada “a stealth missile—with a nose cone—coming out of the right wing’s deepest silo.”

A Democratic staffer for the Senate Judiciary Committee told the left-wing magazine The Nation in 2002: “Estrada is 40, and if he makes it to the circuit, then he will be Bush’s first Supreme Court nominee. He could be on the Supreme Court for 30 years and do a lot of damage.”

“Charles Schumer is one of the people who weaponized the filibuster against judicial nominees, so it is no surprise he opposes a well-qualified nominee with bipartisan support like Judge Gorsuch,” Carrie Severino, chief counsel and policy director for the Judicial Crisis Network, told The Daily Signal in a phone interview. “Sen. Schumer has a longer history of this.”

In a 2007 speech to the American Constitution Society, a liberal advocacy group, after Democrats gained a majority in the Senate, Schumer said:

We should reverse the presumption of confirmation. The Supreme Court is dangerously out of balance. We cannot afford to see Justice [John Paul] Stevens replaced by another Roberts; or Justice [Ruth Bader] Ginsburg by another Alito.

Given the track record of this president [Bush] and the experience of obfuscation at the hearings, with respect to the Supreme Court, at least: I will recommend to my colleagues that we should not confirm a Supreme Court nominee except in extraordinary circumstances.

In early 2016, after the Feb. 13 death of Justice Antonin Scalia, Schumer said the Senate had a duty to vote on whoever President Barack Obama nominated to fill the vacancy. He said:

Well, the job, first and foremost, is for the president to nominate and for the Senate to hold hearings and go through the process. … [Sen.] Ted Cruz holds the Constitution, you know, when he walks through the halls of Congress. Let him show me the clause that says [the] president’s only president for three years.

Does this mean we don’t hold hearings on anything? The president shouldn’t nominate Cabinet ministers? It certainly might mean the Republicans shouldn’t repeal Obamacare in the fourth year. And so, our job is to go forward with the process and then we’ll see what happens.