Why We Have Mitch McConnell to Thank for Justice Neil Gorsuch 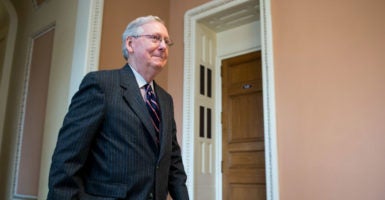 It couldn’t have been a more beautiful day for a Rose Garden ceremony to swear in Neil Gorsuch as the newest associate justice to the U.S. Supreme Court.

And one decision, made by Senate Majority Leader Mitch McConnell just over a year ago, is the reason it was all possible. Not guaranteed, but possible.

When Justice Antonin Scalia died unexpectedly last February, the balance of the high court was perilously in danger. It was already a “swing” court that too often tilted leftward if you believe courts are supposed to interpret the law, not make it.

From upholding the Second Amendment to curbing abortion “rights” to protecting religious liberties, had the reliably constitutionalist Scalia been replaced by an activist justice, the future of such issues might have been decided by the left for a generation.

But losing Scalia’s seat, as it turns out, wasn’t all that was at stake.

Had McConnell not made the quick and decisive decision following Scalia’s death to postpone any judicial confirmation hearings until after the 2016 presidential election, and thereby allowing the next president to appoint Scalia’s successor, it is very likely that now-President Donald Trump might still be citizen Trump.

If President Barack Obama’s choice, Judge Merrick Garland, had been given hearings and confirmed to the court, not only would Scalia’s seat have been lost—perhaps also would the very issue that propelled Trump to win last November.

Like me, I’m sure many of you reading this column know more than one conservative who wasn’t originally enthusiastic about voting for Trump, but pulled the lever for him anyway because of his promise to appoint justices in the mold of Scalia.

Of course, at the time McConnell made his decision, no one knew who the GOP presidential nominee was going to be. And no one knew whether any of those candidates would be able to defeat Hillary Clinton.

But McConnell did what only he as Senate majority leader had the power to do: postpone any hearings and then let voters decide.

He recently said in an interview, “It is the most consequential decision I ever made.”

It was also one that took courage. Courage in that he knew the heat both he and his fellow Republican senators, especially those up for re-election, would take from all those on the left salivating over the potential to solidly tilt the court their way.

Despite the fact that a Supreme Court nomination and confirmation had not occurred that close to a presidential election in over 100 years, Democrats, liberal activist groups, and much of the media all cried foul.

But McConnell and his lieutenants held firm.

Yes, Trump fulfilled his promise to pick from the list of 20 solid conservative judicial nominees. Yes, Gorsuch was a stellar nominee who performed flawlessly in his hearings. Yes, GOP senators stuck together and ensured Democrat Minority Leader Chuck Schumer and company were not able to play out their filibuster circus and derail his confirmation.

All good and all key in the final outcome. But none of it would have occurred had that “most consequential decision” over a year ago not been made.

So, if you’re raising a glass to our new Supreme Court associate justice, raise one to McConnell as well.

And, who knows, this may be just the first of several toasts.