Department of Homeland Security: Courthouse Arrests Are Necessary Because of Sanctuary City Policies 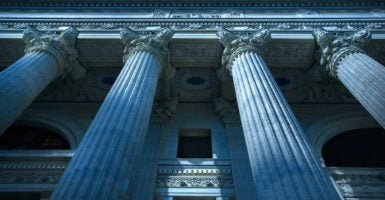 The Department of Homeland Security rejected calls Tuesday for its agents to stop making immigration arrests at courthouses, a tactic that has pitted state judicial officers against the Trump administration in recent weeks.

A spokesman for the agency said immigration enforcement agents will continue to have authority to seize illegal immigrants at courthouses, if they believe it is the best place to make an arrest. And that authority won’t change even if the illegal immigrant in question is also a victim of a crime or a witness to a crime.

Immigration and Customs Enforcement has recently come under fire for conducting immigration enforcement operations at “sensitive” locations, including local and state courts. Critics say the practice intimidates undocumented crime victims and witnesses and prevents them from testifying in criminal cases.

House Democrats recently introduced a bill to ban the arrests.

Last month, the chief justices of the California and Washington state supreme courts each wrote letters to Attorney General Jeff Sessions and Homeland Security Secretary John Kelly, asking them to put a stop to courthouse arrests.

California’s top judge, Chief Justice Tani G. Cantil-Sakauye, accused ICE agents of “stalking undocumented immigrants” at courthouses and said that courts should not be “used as bait in the necessary enforcement of our country’s immigration laws.”

Sessions and Kelly penned a joint letter in response, defending the right of ICE agents to make arrests of illegal immigrants “where probable cause exists to believe that such aliens are in violation of immigration laws.” They also said courthouse arrests were necessary because sanctuary policies in states like California make it harder for ICE agents to arrest removable aliens at local jails.

The policies “specifically prohibit or hinder ICE from enforcing immigration law by prohibiting communication with ICE, and denying requests by ICE officers and agents to enter prisons and jails to make arrests,” Sessions and Kelly wrote.

Lapan said that illegal immigrant crime victims and witnesses can also be criminal aliens who pose a threat to public safety or who have been issued orders of removal in the past. He added, however, that there is a special visa category, known as U-visas, for illegal immigrants who are the victims of crimes, such as sexual assault and domestic violence.

According to U.S. Citizenship and Immigration Services, 10,000 U-visas are available annually, and there is no cap on the number of immediate family members that can derive temporary legal status from the principal applicant.