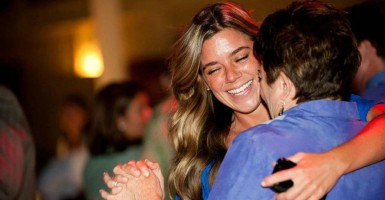 Police say Kate Steinle was fatally shot by an illegal immigrant with felony convictions who should have been in custody or deported. (Photo: ABC News/Steinle Family)

Republican lawmakers in the House and Senate are pressing the Obama administration to get tough with San Francisco and other jurisdictions that don’t cooperate on immigration enforcement, after the fatal shooting of a woman on a popular stretch of the California city’s waterfront.

The man accused of the July 1 killing is an illegal immigrant and convicted felon from Mexico who had been deported five or more times.

“Nearly 170,000 convicted criminal aliens have been ordered deported, but remain at large.”—@SenatorSessions

In a scathing letter, nine Republican members of the Senate Judiciary Committee yesterday told the nation’s top immigration enforcer, Homeland Security Secretary Jeh Johnson, that administration policies resulted in Kathryn “Kate” Steinle, 32, being shot in the chest as she walked with her father.

Your department has refused to confront so-called ‘sanctuary’ jurisdictions, endangering the public safety and leading to tragedies such as the recent killings of Kathryn Steinle in San Francisco, Calif., and Angelica Martinez in Laredo, Texas. These deaths are the result of such sanctuary jurisdictions’ dangerous policies, and this administration’s refusal to do anything to stop them. … [Y]our department has elected to acquiesce willfully to the presence of criminal aliens in the United States and ordered law enforcement officers and agents to look the other way except in extremely limited circumstances.

Steinle, a sales representative for medical devices, died at San Francisco General Hospital two hours after being shot about 6:30 p.m. on Pier 14 at the Embarcadero waterfront. The day before, CNN noted, her Facebook page carried this post: “Whatever’s good for your soul … do that.”

In March, San Francisco authorities had released Juan Francisco Lopez-Sanchez—the man accused of killing Steinle—after dropping drug charges against him. They did so despite what federal authorities say were their instructions that Lopez-Sanchez, in his mid-40s, be detained so they could take him back into custody.

>>> Commentary by Hans von Spakovsky: How San Francisco Aided and Abetted the Murder of Kate Steinle

Under a policy going back to the 1980s, San Francisco in one way or another has refused to cooperate with federal enforcement of immigration law. As in most other sanctuary cities or counties, authorities decline to ask the immigration status of those who come into contact with government.

The subject of the administration’s stance on sanctuary policies also is expected to take up a chunk of Johnson’s appearance next week at a hearing of the House Judiciary Committee.

“We must put a stop to foolish policies that needlessly endanger American lives.”—@RepGoodlatte

Chairman Bob Goodlatte, R-Va., and other members already were questioning President Obama’s recent priority of holding and deporting only those the administration considers the most dangerous.

“Sanctuary city policies coupled with the Obama administration’s lack of immigration enforcement have created a public safety crisis,” Goodlatte said in a statement provided to The Daily Signal.

>>> Video: What Are Sanctuary Cities?

Under Obama, the Department of Homeland Security has “implemented policies that authorize sanctuary cities,” he said, adding: “The tragic murder of Kate Steinle once again underscores the need to end these reckless policies.”

Sanctuary jurisdictions refuse to comply with what U.S. Immigration and Customs Enforcement (ICE) officials call “detainers,” the tool its agents use to pick up criminal aliens in local jails. In testimony earlier this year before Goodlatte’s committee, Immigrations and Customs Enforcement Director Sarah Saldaña said more than 200 jurisdictions don’t honor such detainers.

At immediate issue is Homeland Security’s so-called “priority enforcement policy,” or PEP, which administration critics in and out of Congress say is part of Obama’s intentional decision not to enforce the law.

They also point to the president’s executive actions last year to grant work permits to millions of illegal immigrants—which they decry as amnesty and which a federal judge has frozen until legal action is resolved.

Among a list of 13 questions their letter poses to Johnson, the senators want to know whether the agency has “any guarantees” that San Francisco, Los Angeles County, or other sanctuary jurisdiction will “fully comply” with priority enforcement:

How many jurisdictions that had previously refused to honor detainers or otherwise cooperate with federal immigration law enforcement have committed to comply with PEP in its entirety? …  In light of the tragic murders of Kathryn Steinle and Angelica Martinez … is it still the administration’s position that federal immigration detainers should not be mandatory?

In a statement released with the letter, Sessions added:

Rather than working with state and local law enforcement to identify, detain, and deport dangerous criminal aliens, DHS officials have enabled ‘sanctuary cities,’ dismantled effective cooperative-enforcement programs … and allowed repeat criminal offenders to be released onto American streets by the tens of thousands. Right now, there are nearly 170,000 convicted criminal aliens who have been ordered deported, but who remain at large in our country. This is a direct result of non-enforcement policies.

The new “priority enforcement” strategy, Sessions warned, “ensures that countless more dangerous aliens will be released” and will allow “otherwise entirely preventable crimes, including some of the most violent and egregious, to occur.”

>>> Watch: What One Lawmaker Wants to Do about Sanctuary Cities

Goodlatte said of the measure:

It would also end the president’s ability to shut down immigration enforcement efforts unilaterally and would protect the American public by facilitating and expediting the removal of criminal aliens. We must put a stop to foolish policies that needlessly endanger American lives.

Given the history of such sanctuary cities, however, it likely would take a strong push by Democrats and Republicans in both chambers to gain ground on the entrenched issue.

“U.S. taxpayers shouldn’t be expected to support such misguided local policies that put their safety in jeopardy.”—@SenTomCotton

The other Republican senators signing the letter to Johnson were David Vitter of Louisiana, John Cornyn and Ted Cruz of Texas, Chuck Grassley of Iowa, Mike Lee and Orrin Hatch of Utah, David Perdue of Georgia, and Thom Tillis of North Carolina.

Sen. Tom Cotton, R-Ark., today joined a long line of lawmakers who have confronted the issue over the years. Cotton introduced a bill to deny immigration and law enforcement grants to jurisdictions that refuse to cooperate with federal immigration policies. In a statement citing the Steinle murder, he said:

It is unacceptable that cities would issue ordinances that explicitly aim to frustrate federal immigration laws that are supposed to keep illegal immigrant felons off the streets. U.S. taxpayers shouldn’t be expected to support such misguided local policies that put their safety in jeopardy.

Laredo and 12 other Texas cities, including Dallas and Houston, are on a list of sanctuary cities compiled by the Ohio Jobs and Justice PAC, which calls the list “the most complete and widely used.”

No federal law currently defines sanctuary cities, and the estimated number varies depending on who is counting. Some of the larger ones are Washington, D.C., New York City, Los Angeles, Philadelphia, Chicago, Miami, Baltimore, San Diego, Salt Lake City, Denver, and Seattle.

>>> Related: The Facts About Illegal Immigrants and Crime

Goodlatte and other congressional critics say the administration has made a bad situation worse.

As part of the president’s executive actions to prevent deportation of millions of illegal immigrants, they say, he dismantled a program that identified criminal aliens and replaced it with the priority enforcement program allowing many criminal aliens to remain in America.

By ending Immigration and Customs Enforcement detainers in most situations, House Judiciary staffers say, the administration took away officials’ ability to pick up and process “removable aliens” when law enforcement encounters them.

And rather than insist to local and state jurisdictions that its detainers are mandatory, Immigration and Customs Enforcement instead will ask them to voluntarily notify the agency before releasing “suspected priority” illegal immigrants.

“This effectively leaves states and localities responsible regarding the decision of immigration enforcement,” a Senate Judiciary staffer who asked not to be identified told The Daily Signal. “They can refuse to comply with the requests for notification should they choose to do so.”

So far, only Los Angeles County has agreed to join the voluntary program.

This report has been updated, including to correct the number of the pier where Kate Steinle was shot.