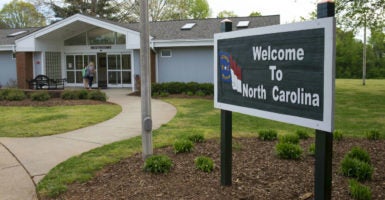 North Carolina's H.B. 2 bill, which requires people in government buildings to use the bathroom of their sex as listed on their birth certificate, attracted nationwide attention and controversy. (Photo: Robin Rayne Nelson /Zuma Press/Newscom)

Now, more than a year later, the Associated Press has provided an updated estimate of the economic fallout:

The Associated Press used dozens of interviews and multiple public records requests to determine that North Carolina’s ‘bathroom bill’ will cost the state more than $3.76 billion in lost business over a dozen years.

The overwhelming majority of the reported impact, or $2.66 billion over 12 years, is attributable to PayPal’s cancellation of a planned 400-employee operations center less than two weeks after the bill was passed.

The reported figures probably overstate the economic impact of each individual item. They are based on input-output models, which assume that dollars spent in initial transactions—such as by a business that decides to locate in a given area—will automatically cycle through the economy, creating a ripple effect and stimulating further economic growth.

But this ignores supply-side constraints, such as the number of available workers.

If North Carolina were still in the midst of a recession and had an unusually large number of people looking for work, this model would prove more accurate. But that is not the case.

North Carolina’s average unemployment rate fell from 5.8 percent to 5.1 percent between 2015 and 2016, when it was not significantly different from the national average.

Across the nation, labor market slack—that is, the excess number of people out of work and available for hiring—is vanishing.

Input-output model results also depend heavily on the division of income between parties.

In the case of the PayPal expansion, the model shows that the 400 “nondepository credit intermediation and related services” jobs were expected to result in annual sales of $207 million, of which $30 million would go to employee compensation, $28 million would go to other business expenses, and the remaining $149 million would be proprietor’s income.

While the forecasted effects on the North Carolina economy result mostly from proprietor’s income, PayPal is a publicly traded company headquartered in California, so the bulk of these profits would most likely be distributed outside of North Carolina, with little further impact on the state.

Even if the reported estimates of the impact of H.B. 2 prove to be accurate, they should be considered in the context of North Carolina’s half trillion-dollar gross domestic product.

In that case, the estimated impact is actually quite modest, resulting in a loss of no more than 0.1 percent of the state’s GDP, or about $1 for every $1,000 of income earned in the state.

This cost of roughly a dollar a week for the median North Carolina household would be a small price to pay to protect the privacy and safety of women and girls.