President Donald Trump’s first weeks as commander in chief have been challenged by upheaval within his National Security Council, the White House group tasked with coordinating and implementing foreign policy and counterterrorism strategy.

The resignation of Michael Flynn as national security adviser—head of the National Security Council—comes at a time when acute foreign policy decisions await the new administration.

As Trump seeks to recover, former NSC officials say it’s important that the White House quickly establish a functional council that can spearhead the president’s agenda.

“We have never seen anything like this,” said Kenneth Pollack, a foreign policy fellow at the Brookings Institution who has served twice on the NSC staff.

“We certainly have seen national security advisers leave basically after the first year of an administration, but never after less than a month,” Pollack said in an interview with The Daily Signal, adding:

Flynn was the one guy on foreign affairs who has been joined at the hip with Trump from the beginning. Now he’s out. No one knows what comes next. To get the policy, you have to get the person in place. Until that happens, the rest of the world to a certain extent has to wait.

Flynn’s tenure lasted only 24 days before the retired Army lieutenant general resigned after admitting he had misled the vice president and other White House officials about the contents of a phone call he had with the Russian ambassador to the U.S. weeks before Trump’s inauguration

The NSC, originally created in 1947, has quadrupled in size over the past two decades, and doubled under President Barack Obama.

Obama replaced his first national security adviser, James Jones, within two years after concluding the retired Marine general was a bad match to lead the NSC in the direction the president wanted to take it.

“What we’ve consistently seen is the NSC stumbles around for the first months of every administration and eventually figures it out and moves forward,” Pollack added.

Flynn’s earliest days were marked with tension, and change.

He sought to reform the council—aiming to cut its size roughly in half from more than 400—and installing staff he knew from his military days and when he was director of the Defense Intelligence Agency.

Members of both parties on Capitol Hill have expressed concerns that the NSC got too big under the Bush and Obama administrations, and became overly operational and involved with details meant to be reserved to Cabinet agencies.

In addition, the White House elevated Steve Bannon, Trump’s chief political strategist, to the NSC’s exclusive principals committee, meaning he could attend regular meetings normally consisting of members of the military and intelligence communities. This move was widely criticized because the NSC is traditionally meant to be separated from politics.

Some of these changes may have made holdover staff members uncomfortable.

A senior Trump administration official told The Daily Signal that many NSC staff members—career government civil servants—who did not want to work for Trump returned to their regular agencies. 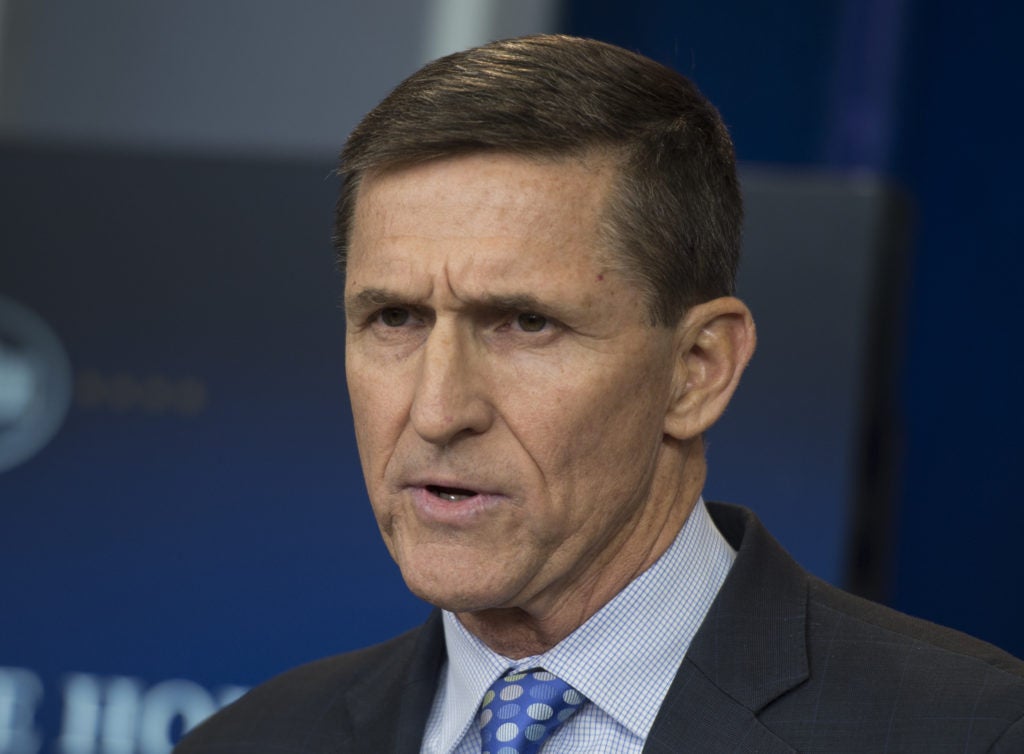 National security adviser Michael Flynn resigned after admitting he misled Vice President Mike Pence and other White House officials about the contents of a phone call with the Russian ambassador to the U.S.  before Inauguration Day.  (Photo: Molly Riley/UPI/Newscom)

The official said that about 80 percent of an administration’s NSC usually is staffed by career government civil servants — known in government lingo as “detailees.” The rest are direct hires—political appointees—who usually depart when the administration changes.

About 15 percent of the NSC staff remains unfilled, the official said, adding that he expects the next national security adviser to maintain Flynn’s goal of staffing the council with a head count somewhere in the 200s.

None of Flynn’s direct hires have left the NSC yet despite his departure, the official said, including K.T. McFarland, the deputy national security adviser.

The official also disputed criticisms that Flynn was leaning on military hands to staff the NSC. He said only one of six deputies chosen by Flynn has a military background—David Cattler, a former Defense Intelligence Agency official tapped to oversee regional affairs.

The official, who insisted on anonymity to speak freely, disputed accounts of turmoil:

On the one hand, yes, what happened with Flynn is destructive and it’s never happened before this early in an administration. On the other hand, the NSC is doing what it’s supposed to do, holding committee meetings, preparing for phone calls and meetings with foreign leaders. The NSC is very active, so it’s unfair to say it’s in turmoil, aside from the destructive nature of the leadership change so early.

Trump’s first month—and Flynn’s brief tenure—also has been marked by a proliferation of leaks that some Republicans consider to be actions carried out by disgruntled career government employees aiming to undermine a president they don’t like. Democrats see the leaks as acts of public service meant to reveal potentially inappropriate behavior.

Drafts of executive orders, including ones Trump hasn’t issued yet, have circulated around Washington. Transcriptions of Trump’s conversations with foreign leaders have been published in news reports.

And numerous stories about Trump campaign officials’ conversations and potential connections with Russian officials—including a Washington Post story documenting Flynn’s call with the Russian ambassador—have been written based on leaks from intelligence and law enforcement sources.

The senior Trump administration official said the White House is unsure of the source of the leaks, and he stressed that it’s not unusual for government bureaucrats left over from the prior administration to publicly disclose displeasure with the new president’s policies and team.

But Trump, speaking Thursday with House Republicans, seemed to contradict that, according to pool reports, telling lawmakers: “We’re going to find the leakers and they’re going to pay a big price.”

The spotlight has finally been put on the low-life leakers! They will be caught!

Leaking, and even illegal classified leaking, has been a big problem in Washington for years. Failing @nytimes (and others) must apologize!

Legal experts say it would be illegal for the president to target employees who are protected by civil service law, as opposed to political appointees.

And former national security officials say it’s not unusual for presidents to express anger with leakers.

Obama prosecuted more whistleblowers than all of his predecessors combined.

“Leaks are a big problem for every administration,” said David Shedd, a Heritage Foundation visiting fellow who held intelligence policy positions at the NSC under President George W. Bush. “There is a particularly strong anti-Trump sentiment in the bureaucracy, so I expect that there is a greater propensity to leak.”

“That said,” added Shedd, also a former deputy director of the Defense Intelligence Agency under Obama, “leaks generally are intended to generate support or undermine support for policy positions.”

James Jeffrey, an assistant to the president and deputy national security adviser in the George W. Bush administration, said the best way to subdue a culture of leaks is for the president to create a disciplined, coherent NSC process that allows for dissenters to express concerns internally, minimizing the incentives for leaks.

Jeffrey said Trump should select an “honest broker” to replace Flynn to lead the NSC, which he said is supposed to be a management center that gathers views from across multiple agencies and then implements the decided policy.

“When you have a functioning NSC where the process is good and all ideas are vetted, even if there’s disagreement on the policy decision, you won’t get leaking,” Jeffrey told The Daily Signal. “Leaking tends to be a cry for help within the bureaucracy.”

Whoever replaces Flynn will have to organize policy in key areas, including developing a response to North Korea’s recent missile launch, implementing a strategy to defeat ISIS, and deciding how to approach the U.S. relationship with Russia.

Flynn had perhaps the strongest views of Trump’s foreign policy team on Russia, viewing that country as a possible partner to fight Islamic terrorism, and experts say it’s especially important to know how the next national security adviser envisions U.S. relations with the longtime adversary.

“There is a case for trying to reorient relations with Russia irrespective of who is national security adviser,” Michael O’Hanlon, director of research for the foreign policy program at the Brookings Institution, said in an email to The Daily Signal, adding:

Plus, Secretary of State Rex Tillerson and Trump still favor some kind of rethinking. The question is, how do we do that in substantive terms. This is an example of where the NSC, and the national security adviser, can avoid getting bogged down in detail or micromanagement, encourage creative thinking and constructive, ideology-free debate on big issues of the day.

The task ahead for Trump is formidable — and important.

“Settling the turmoil that currently appears to exist in the NSC is imperative to ensuring national security policy gets on track,” Heritage’s Shedd said.