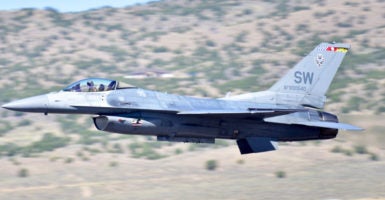 TransDigm and its subsidiaries provide spare parts for many military aircraft, such as the F-16 Fighting Falcon. The Pentagon’s inspector general found that the company was making excess profits on 46 of the 47 parts it reviewed. Pictured: The F-16 Fighting Falcon performs precision aerial maneuvers at the 55th National Championship Air Races in Reno, Nevada. (Photo: Lyle Setter/Icon Sportswire/Getty Images)

Nathan Royce is a member of the Young Leaders Program at The Heritage Foundation.

How would you react to a store selling a gallon of milk for $180, a price about 45 times the average cost?

The House Oversight and Reform Committee confronted this question recently at a hearing on TransDigm, a company that left the Defense Department with the dilemma of choosing between wasting taxpayer resources or failing to meet capability standards.

TransDigm and its subsidiaries provide spare parts for many military aircraft, such as the AH-64 Apache helicopter and the F-16 Fighting Falcon. The Pentagon’s inspector general found that the company was making excess profits on 46 of the 47 parts it reviewed.

In some cases, TransDigm was charging more than 4,000 times the value of the part, according to the inspector general. In total, TransDigm earned $16.1 million beyond the government benchmark for reasonable profits.

Who are we to blame for this, the government officials who signed the contracts or a greedy corporation?

Due to systemic flaws in the defense contracting process, neither party is totally at fault. A number of factors made it almost impossible for Pentagon contracting officers to determine how much they should pay for the products.

That lack of candor prevented contracting officers from determining a price based on production costs.

TransDigm is the sole source of 39 of the 47 products examined. The Pentagon cannot get the parts from any other manufacturer, as no other producers exist.

Not only does that create vulnerabilities along the supply chain and decrease innovation, it also makes it difficult to determine the fair price for those goods.

Although $16 million might not seem like a lot of money, relative to the defense budget, wasteful spending is a problem.

Aside from the fact that it is a gross misuse of taxpayer resources, it has more far-reaching effects. Every dollar wasted is a dollar that is no longer available to purchase other critical equipment.

Such waste prevents new companies from breaking into the market. That’s because the Pentagon typically prefers trusted vendors. As such, when there’s a limited pool of money, it’s not as likely to take a risk on a newer producer.

When wasteful spending is curbed, it will create more room for investment in new companies and add greater competition within the industry.

Market forces have also contributed to this consolidation of the defense industry, leading to concerns about future mergers between major military contractors.

The concern is that this could create corporations with the ability to control the decisions the Department of Defense makes, resulting in a system of crony capitalism and damaging defense capability.

In its report on TransDigm, the inspector general made several recommendations on how to prevent similar situations in the future.

While that could mitigate problems regarding sole suppliers, it would not fix the intrinsic issue. Wherever the government relies on a sole source for military hardware, there will inevitably be weaknesses in the defense industrial base.

Ultimately, it’s in the interest of U.S. national security to continue rebuilding our military. However, that cannot be done effectively if the Pentagon is wasting valuable dollars on overspending for defense products.