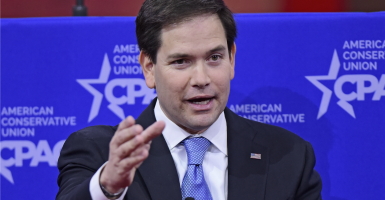 Sen. Marco Rubio, ceding no ground to other Republican presidential candidates on tough immigration reforms, this morning said he has “a problem” with interest groups that claim illegal immigrants have a right to stay in America and become citizens.

It’s one thing to appeal to the nation’s future or even morality, the Florida Republican said, but not to a right to break the law.

And “one of the problems” he has with some pro-amnesty organizations is that they pressure President Obama and members of Congress with that argument, he said.

Rubio made the comment during an appearance at the Ideas Summit hosted by the National Review Institute in Washington, D.C.

In a question-and-answer session with National Review writer Jim Geraghty, Rubio also said he favors being “as strict as possible” with criminal background checks in any eventual amnesty program for illegal immigrants.

Rubio was an original sponsor of Senate-passed legislation that sank in the House when many conservatives and other critics opposed it as “blanket amnesty” for an estimated 10 million illegal immigrants.

Rubio later said that approach was a mistake when the public already doesn’t trust the government to secure the southern border and enforce existing laws.

Today, Rubio said leaders in Honduras, Guatemala and El Salvador have enlightened him about the “traffickers” who smuggled tens of thousands of children from those countries across the Mexican border into the U.S.

The traffickers, he was told, convinced parents to send their children by citing Obama’s deferral of deportation proceedings for millions of young people brought here unlawfully in past years.

The president’s recent unilateral action to allow as many as 5 million illegal immigrants to stay and work here—what critics call “executive amnesty”—has made it extremely difficult to achieve consensus, Rubio said.

So “the time has passed” for a comprehensive bill like the one he previously championed, he said. The immigration system first must stop acting like “a hotel that checks you in and never checks you out.”

And, he said, he wants to modernize the legal immigration system to emphasize  merit and ability to contribute economically.

“If you’re smart in your field, I want you to bring that to America,” Rubio said, arguing that the country needs math and science wizards just as baseball and basketball need “the best pitchers and dunkers.”

On the question of assimilation, Rubio—the 43-year-old son of a couple who came to America from Cuba in the mid-1950s and worked their way into the middle class—said conservatives “shouldn’t underestimate how many immigrants truly want to become Americans.”

“We have a challenge in this country of assimilating people that were born and raised here too,” he said to laughter and applause.

He took a swipe at textbooks and other education tools that downplay American exceptionalism, noting that the nation’s prosperity and values “saved the world from evil” at least twice in the last century:

On the crowded field of GOP presidential hopefuls, Rubio said “competition always breeds excellence,” and meanwhile the Democrats are “struggling to come up with one candidate.”

He said he expects the current crop to produce a president, a vice president, Cabinet officials “and a future president.” He didn’t name names for that first category, but at one point quipped that “the Marco Rubio hypothetical” is looking good.

Rubio also addressed the conference’s theme, “Why the Future is Conservative.” Conservatism, he said, is about applying “time-tested truths” of family, faith and character to current circumstances. Efforts to replace them with government programs have been “an abysmal failure.”

The principles of limited government and free enterprise will “work even better” in the global competition of the 21st century, Rubio said, so long as the nation isn’t “left behind” by failing to equip its children with skills and degrees that lead to jobs.