Pro-Amnesty Republicans Would Undermine Border Security and US Law 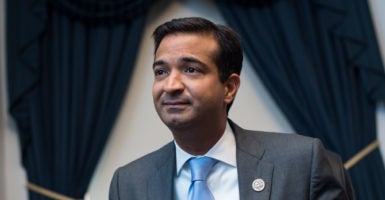 Rep. Carlos Curbelo, R-Fla., is a leading proponent of the discharge petition to force a House vote on an amnesty bill. (Photo: Tom Williams/CQ Roll Call/Newscom)

With some Republicans pushing for a vote on amnesty for those brought illegally to the U.S. as children, Congress should remember why such policies hurt, rather than help.

In addition to giving short shrift to other needed immigration reforms and being unfair to both Americans and legal immigrants, the current immigration efforts will likely only encourage more illegal immigration. In fact, it’s happened before.

In 1986, the U.S. provided amnesty to almost 3 million illegal immigrants while promising to stop future illegal immigration. While the bill was being considered, some senators raised concerns about the message that such an amnesty would send.

Sen. Jesse Helms, R-N.C., argued that “[a]mnesty for the millions of illegal aliens currently in these United States would establish a dangerous precedent which could well encourage additional illegal immigration.” Sen. Phil Gramm, R-Texas, stated that “there may be those in other countries who will say that since we granted amnesty once, maybe we will do it again.”

While those promises to stop future illegal immigration came to nothing, the amnesty took effect immediately. It sent exactly the message that Helms and Gramm feared—that the U.S. was willing to reward those who came here illegally by granting them U.S. citizenship.

Since then, the number of illegal immigrants in the U.S. has grown to around 12 million. During that time, Congress has considered but rejected additional amnesties.

The current proposal being pushed by some Republicans would legalize as many as 1.8 million illegal immigrants. But doing so would only double down on the failed amnesty model that was tried in 1986 and the 1990s.

President Barack Obama tried to get Congress to pass more amnesties. Frustrated at its resistance, he unilaterally created a pseudo-amnesty through the Deferred Action for Childhood Arrivals program. DACA unlawfully gives illegal immigrants benefits and protection from deportation, despite U.S. laws to the contrary.

Using the same legal logic as DACA, Obama tried a further executive amnesty with the Deferred Action for Parents of Americans, but that was defeated in the courts.

Members of Congress who hail amnesty as a solution to our immigration woes should keep in mind the lessons of past amnesties: They do not stop future illegal immigration. They only incentivize more of it.

Congress should instead work with the administration to improve the U.S.’ enforcement and border security tools and close loopholes. That would send a clear message to the world that illegal immigration to the U.S. is not an option.