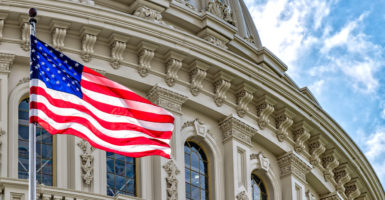 The word on the street is that House Republicans will vote on several immigration bills in June in order to stave off a discharge petition that would force a vote on amnesty.

Unfortunately, these bills are in fact amnesty bills. They would betray the conservative immigration reforms that the nation has long needed.

While many of the details are still unknown, one thing we do know is that this deal is getting worse all the time.

When members of Congress originally discussed a “DACA fix,” it was meant to protect the less than 700,000 illegal immigrants currently in the Deferred Action for Childhood Arrivals program. Then, Democrats demanded 1.2 million. President Donald Trump then offered an amnesty deal to protect 1.8 million, which the Democrats rejected.

That’s the deal that is now being reconsidered, but chances are it will only get worse.

As has always been the case with amnesty legislation, amnesty is the central and first part of the deal to take effect—everything else is just grease for the wheels. Rather than actually tackling border security, improving enforcement, or closing loopholes, Congress entertains amnesty. Instead of taking a hard look at the legal immigration system and vigorously debating the many ways it can be reformed to be more merit-based, Congress will consider something worked out in a backroom deal.

Even when certain reforms have been enacted, congresses and administrations have lacked the will to enforce these new policies. Amnesty is granted first, but the other promised reforms are rarely carried out.

So the question must be asked: Why would this time be different?

The last time the U.S. tried amnesty in 1986, senators took to the floor and promised that “this is it. It is one time. You either show up on this one or you will be rejected.” These same senators promised that their comprehensive deal would stop illegal immigration.

We now know these promises were false—they never panned out. Since then, Congress has been unable to take meaningful action to stop illegal immigration. The legal immigration system was designed in 1965 and hasn’t been seriously changed since.

Yet here we are again, debating amnesty rather than the constructive policies we so badly need.

Rather than entertain amnesty, Congress should pursue better border security, adding new border barriers where needed and more technology where it is more cost-effective. Congress should end loopholes in our immigration laws and sanctuary cities that make it difficult to enforce U.S. immigration laws. It should also give immigration officials and judges more tools to catch and remove illegal immigrants.

In addition, the Diversity Visa Lottery and all special preferences for brothers, sisters, parents, and relatives other than spouses and minor children should be eliminated and replaced by new merit-based visas.

These are the reforms that Congress should pursue, and that the American people expect.