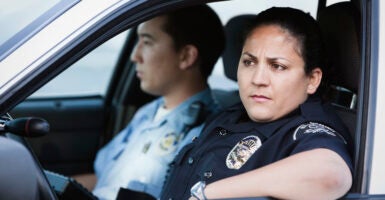 In addition to the 48 police officers feloniously killed in 2019, 41 "died as a result of accidents that occurred in the line of duty," according to an FBI report. (Photo: Hill Street Studios/Getty Images)

Do you remember this tragic and horrendous story?

It started on the afternoon of April 27, 2018, when a 28-year-old man in Nogales, Arizona, tried to rob a taxi driver. It eventually led to the murder of a police officer.

The Federal Bureau of Investigation later explained what happened in its annual summary of cases involving law enforcement officers who are “feloniously killed” in the line of duty.

“Earlier in the day, a person called for a taxicab, intending to rob the driver and carjack the vehicle using a .223-caliber semiautomatic rifle,” said the FBI summary. “Once he was seated in the taxicab, the suspect assembled the weapon in the back seat, then informed the driver he was being robbed.

“When the driver did not cooperate, the suspect fired a round through the floor of the vehicle. Consequently, the taxicab lost power, and the driver ran from the vehicle,” said the summary.

This criminal then unsuccessfully tried to hijack a truck, succeeded in taking a car from “two elderly people,” abandoned that car in a parking lot, “and stole another car from a man there and drove away.”

But then a police officer caught up with him.

“The NPD veteran officer, who had 11 years of law enforcement experience, drove past the suspect, made a U-turn, activated his overhead emergency lights, and began following him,” said the FBI summary. “At 2:43 p.m., the suspect pulled into the parking lot of a market, exited the vehicle as it was still moving, and began firing at the officer’s patrol vehicle.

“The officer attempted to exit the vehicle, but the suspect used his body to slam the door and continued to fire through the window at the trapped officer,” said the FBI summary.

“The officer was struck above his body armor in his neck/throat, front upper torso/chest, front lower torso/abdomen, arms, and hands,” said the summary.

“He subsequently died from his injuries,” it said.

When the court convened to sentence Murillo, the dead officer’s wife rose to speak.

“Not only did Nogales Police Department lose a member of their own,” Alyssa Cordova told the court, as reported by Nogales International, “a mother lost her only son, three children lost their father, I lost my husband, and our unborn child never got to meet him.”

“This individual should never be given the opportunity to hurt and destroy another family as he has ours,” she told the judge.

Superior Court Judge Thomas Fink apparently agreed. “You’re going to be housed with the lowest form of human life that exists on this planet,” he told Murillo, according to Nogales International. “You’ll finish your natural life in prison, and you will die with those people.”

As The Associated Press put it, “Murillo was given three concurrent life prison terms … plus 119 years.”

Cordova was one of 56 law enforcement officers “feloniously killed” in the United States in 2018. A felonious killing, according to the FBI, is an “[i]ncident type in which an officer, while engaged in or on account of the performance of their official duties, was fatally injured as a direct result of a willful and intentional act by an offender.”

In the 10 most recent years for which the FBI has published numbers (2010 through 2019), 511 law enforcement officers have been the victims of felonious killings.

That is almost one a week—over the span of a decade.

Each of these officers gave their life to protect their community and country.

In 2019, 48 law enforcement officers were victims of felonious killings.

Officer Natalie Corona of the police department in Davis, California, was only 22 years old on Jan. 10, 2019, when she investigated a traffic accident. Her father, The Sacramento Bee would report, had “spent 26 years as a Colusa County Sheriff’s deputy.”

“Body camera and in-dash camera footage showed the officer, who had 6 months of law enforcement experience, responded to the scene of a traffic collision and was investigating the incident when an individual approached on foot, pulled out a .45-caliber semiautomatic handgun, and fired multiple rounds at the officer from 10 to 15 feet away,” said the FBI summary.

“The officer, who was wearing body armor, was struck by four rounds—piercing her front upper torso/chest and her neck/throat,” said the summary.

“The officer immediately fell to the ground,” said the summary, “she never had a chance to react to the gunfire.”

“Officers located the 48-year-old suspect at his residence and attempted to negotiate his peaceful surrender, but the suspect refused to cooperate,” said the FBI summary.

“Early the next morning,” it said, “he committed suicide.”

When a police officer wrongfully kills or injures a civilian, justice should be served and the news media should pay attention.

But have the media and our political elites paid adequate attention to the 511 police officers feloniously killed while protecting their fellow citizens over the last decade on record?