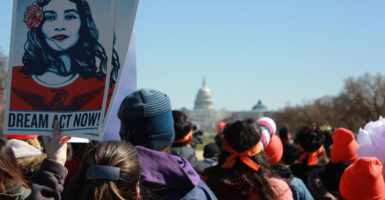 It’s being reported that House Republicans plan to vote on several immigration bills in June in order to head off a discharge petition by a group of party moderates that would force a vote on amnesty.

Those bills, as I noted previously, are in fact amnesty bills.

And as is generally the case with amnesty bills, these proposals are growing more and more unfair not just to American citizens, but to legal immigrants.

Amnesty rewards those who have broken the law with citizenship, a precious thing in a republic, while millions of legal immigrants have waited—and are waiting—to come to the U.S. the right way.

There are also millions of people who want to come to the U.S., but have no legal right to come here, and so they decide to respect our laws and stay where they are.

A government policy that rewards law-breaking aliens, rather than law-respecting immigrants, should trouble Congress.

Even more unfair is that amnesty rewards illegal aliens, while American citizens who break the law get no such free pass. If, for example, an American braids hair without a license, allows his or her pet to scare a wild animal in a national park, or makes a mistake on his taxes, he or she will face significant penalties or even go to prison.

Americans who break the law can and do lose their freedom and often forfeit some of their rights. And yet, aliens who illegally enter the U.S. are rewarded with additional rights and benefits, such as the ability to work in the U.S.

How is that fair to American citizens?

At the core of this unfairness is the breakdown of the rule of law, which is—or should be—a central tenet of modern liberal societies. Government should apply the laws fairly and equally to all people. It doesn’t play favorites and ignore the laws for some people or groups while enforcing them against others.

That’s a huge problem with legislative amnesties, as well as with executive policies, such as the Deferred Action for Childhood Arrivals program, which never should have existed in the first place.

That’s because DACA is unlawful and unconstitutional, based on the ruling of the appellate court against the similar Deferred Action for Parents of Americans and Lawful Permanent Residents program.

To put this in context: Liberals value all sorts of laws regarding the environment. If the government allowed environmental laws to be broken without punishment, and then wanted to give an amnesty to those companies breaking the laws, those on the left would be angry—and rightly so.

No one likes it when laws they care about are broken and when those responsible are given a “get out of jail free” card.

As such, Congress should put the needs and interests of American citizens, as well as those of legal immigrants, before those of illegal aliens.

Congress should first improve border security, enhance enforcement of our immigration laws, and move our legal immigration system toward one that is merit-based. It owes the American people at least that much.