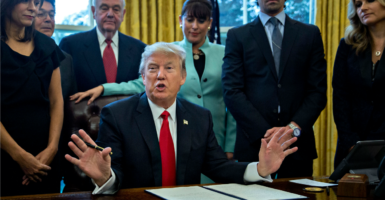 President Donald Trump's executive order on regulation is only a first step, and achieving the goal of reducing the burden of red tape will take much more. (Photo: Sipa USA /Newscom)

Borrowed from similar rules in effect in countries including the United Kingdom and Canada, the idea has gained popularly in the regulatory reform community in recent years. The Trump administration’s embrace of it sends a clear message to regulators: Trump expects them to decrease—not increase—the burden they place on Americans. This is significant. The “one in, two out” rule is only a first step, though, and achieving the goal of reducing the burden of red tape will take much more.

The Obama years were a time of eye-popping expansion of America’s regulatory state, with new annual regulatory costs exceeding $100 billion annually since 2009. But the growth of the regulatory state didn’t begin with President Barack Obama.

According to the Office of Management and Budget, the burden of regulation has grown every year since 1982. Trump’s goal of reversing this trend is a welcome one.

But the “one in, two out” rule by itself is unlikely to do much toward that end. In Canada, the rule has resulted in small paperwork reductions, but few changes of significance in terms of reduction of government overreach. In the 2015-2016 fiscal year, the total savings was C$9 million. And C$8 million of that came from a single rule.

In the U.S. similar results can be expected. For starters, independent agencies such as the Federal Communications Commission are excluded from the 2-for-1 requirement.

Also, it’s unclear whether any two rules could be used to offset a new regulation: If so, expect pro-regulation forces to try to pair massive new rules with insignificant old ones. And if the rules must be of similar cost, how is that to be determined?  The original cost estimate for any rule is higher than the savings from getting rid of it later, since much of the cost is sunk and irretrievable.

Moreover, any regulation proposed for elimination will almost certainly take years to actually repeal, if it is repealed at all.

In addition to the 2-for-1 rule, the executive order imposes a “regulatory budget” system on regulators, in effect capping their regulatory expenditures. Such a budgeting system, given the penchant of regulators to game such things, should be approached with caution. The order gives few details about the system, however, except that the budget for the current year is to be zero.

To successfully achieve the crucial goals of reducing regulation, more is needed. Individual agencies must begin to examine and repeal unnecessary rules under their purview—regardless of whether they have new rules to replace them. Independent agencies must be brought into the effort, and included in White House regulatory reviews.

Congress must be engaged—assuming its constitutional power to review rules being imposed (as would be done under the REINS Act) and increasing requirement on regulators imposing mega-rules (as would be done under the Regulatory Accountability Act). And the president must appoint regulators who understand the costs that rules impose on America, and are committed to relying on free markets whenever possible.

Accompanied by such changes, the good intentions expressed in this week’s executive order might actually be achieved.