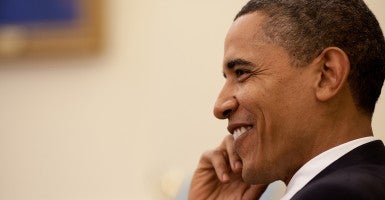 June’s Supreme Court ruling limiting President Obama’s authority to make recess appointments is a victory for constitutional government. But before Americans celebrate too much, they should take heed of the White House spin the next day.

After saying how deeply disappointed the president was, Press Secretary Josh Earnest added: “The president is in no way considering scaling back” his executive actions.

Indeed he won’t. And you know why? He and his supporters believe that government overreach is a perfectly good thing. It’s why he’s in office.

Press coverage of this and other examples of government overreach, however, say the debate is all just politics. It’s about Republicans trying to block Mr. Obama’s agenda. At worst, it’s a power game. At best it is merely, as Washington Post columnist Ruth Marcus put it, a question of “situational ethics.”

Is it really just a game? Politicians may act that way, but most Americans (even liberals) don’t think it’s right to abuse government power. You can bet that Ms. Marcus (who called the president’s Republican critics “overwrought, veering on unhinged”) would not be so sanguine if a Republican president were unilaterally overturning provisions of Obamacare. She would likely be one of the loudest critics, even espousing Madisonian nostrums about the beauty of checks and balances.

The “everybody does it” attitude is not only insincere but dangerous. The Constitution and the law are meant to establish rules, precedents, and a separation of powers to protect all of us from the tyranny of government abuse. Throughout our history people tried to game the system: Andrew Jackson ignored the Supreme Court, and Franklin Roosevelt actually tried to pack it. Most Americans, though, never lost sight of the belief that these were mistakes, discredited exceptions to the rule.

But we are losing that belief. Today it is routine to argue that constitutional questions are all about power. The Constitution is but a tool to bend to one’s political will. The ends justify the means. The law is something to use, and even to ignore if you’ve got the power — in the White House or some judge’s chambers — to do it.

What’s happening to our understanding of the Constitution and the law is actually part of a bigger trend. American “liberalism” is becoming increasingly illiberal. Liberals are willing to bend the rules and use intolerant, illiberal methods to get their way, regardless of what it does to the Constitution or the law, or how it affects people’s rights.

This is one reason why liberals have such a hard time understanding what the fuss over the Internal Revenue Service is all about. They actually think that targeting the “tea party” is just fine. It’s not only a political judgment but an ideological one: The tea party is a mortal threat to their way of governing. Therefore, the IRS, as a bona fide representative of the administrative state, should have wide latitude to target people who threaten its very existence. It’s merely protecting the revenue interests of the American people, which to their way of thinking is far more important than defending the equal rights of Americans before the law.

Of course they would think otherwise if the IRS were targeting liberal groups. Indeed many liberals cheered on former IRS Commissioner Johnnie M. Walters — who just passed away — when he resisted President Richard Nixon’s attempts to use the agency against his political enemies. But they are silent now that current IRS Commissioner John Koskinen appears to be covering up the loss of ex-IRS official Lois Lerner’s emails.

That difference speaks volumes. Walters ultimately respected the rule of law above his party, his administration, and indeed even above the near-term interests of his agency. Mr. Koskinen does not. He may have a long and illustrious career as a public servant, but apart from the fact that he’s also a big donor to the Democratic Party, his loyalties appear to be to the reputation and prerogatives of the IRS.

He’s dedicated as a servant, all right — of the permanent administrative state rather than the Constitution and the American people. And that is the Achilles’ heel of modern liberalism.

Originally posted on The Washington Times.