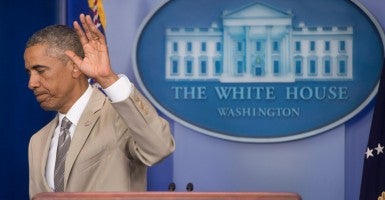 President Obama has decided to wait until after November's elections to issue his executive order granting amnesty to millions of illegal immigrants. (Photo: Michael Reynolds/EPA/Newscom)

President Obama won’t take any executive action on immigration in the coming weeks, opting instead to wait until after this fall’s midterm elections.

Worried about backlash at the polls, Obama delayed his amnesty executive order.

Despite an earlier promise to act before the end of summer, the White House confirmed today that Obama had instead decided to wait until after the Nov. 4 elections  to avoid politicizing the issue. An estimated 5 million illegal immigrants could get amnesty, the Washington Post reported last month.

With control of the U.S. Senate up for grabs this fall, Obama reportedly didn’t want to jeopardize his long-term desire to pass a comprehensive bill. The Associated Press likened the issue to the Democrats’ passage of gun control in 1994.

In that year’s election, Republicans won 54 seats in the U.S. House and nine in the Senate to claim control of Congress. To this day, gun control remains a contentious issue that many lawmakers would rather avoid.

Obama’s decision to delay action doesn’t mean it won’t happen later this year. That drew a sharp rebuke from critics on the left and right.

We are bitterly disappointed in the president and Democrats. We didn’t make the reform promise; we just made the mistake of believing it.

Jorge Ramos, an anchor on ABC News’ Fusion, said, “A promise is a promise.”

This presidential delay means that more innocent people will be deported and more families separated. It’s the triumph of partisan politics.

POTUS must abandon attempts to issue blanket amnesty by exec order & focus on securing the #border as the House did. http://t.co/K0sDTa5tob

No surprise: Prez delays imm plan until after election. Glad no exec action but proof it’s ALL politics ALL the time w this WH #FollowTheLaw

Activists on both sides of the amnesty debate had been preparing for Obama to take action ever since his June 30 directive to Homeland Security Secretary Jeh Johnson and Attorney General Eric Holder to come up with options for the White House to act unilaterally.

In recent weeks, however, public opinion polls have showed the unpopularity of the idea and vulnerable Democrats had spoken out against the move to avoid backlash at the polls.

“Not surprisingly,” Holler said, “President Obama made yet another politicized decision. But the red-state Democrats hoping to be saved must still explain their 2013 vote for amnesty and why they are not working to prevent a post-election amnesty.”