At March for Life, Pence Pledges Restoration of ‘Culture of Life’ in US 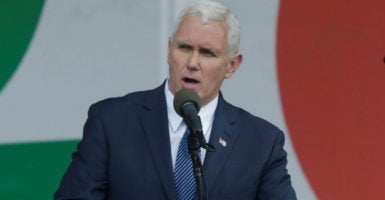 "Along with you, we will not grow weary, we will not rest until we restore a culture of life in America for ourselves and our posterity,” Vice President Mike Pence said. (Photo: Yuri Gripas/Reuters/Newscom)

“Life is winning again in America.”

That was the message Vice President Mike Pence told the thousands gathered for the March for Life in Washington, D.C., Friday.

“Along with you, we will not grow weary, we will not rest until we restore a culture of life in America for ourselves and our posterity,” Pence said.

The vice president, who was introduced by the nation’s second lady, Karen Pence, made history Friday as the first vice president to attend and address the March for Life, which has been held annually since 1974.

“I am deeply humbled to be the first vice president of the United States to ever have the privilege to attend this historic event,” he said.

He also spoke of the Trump administration’s plan for achieving pro-life victories.

“On Monday, President [Donald] Trump reinstated the Mexico City policy to prevent foreign aid from funding organizations that provide or promote abortions worldwide,” Pence said, adding that “this administration will work with the Congress to end taxpayer funding of abortion and abortion providers.”

He also pledged that Trump’s Supreme Court pick would “uphold the God-given liberties enshrined in our Constitution in the tradition of the late, great Justice Antonin Scalia.”

In his remarks, Pence cited the Founding Fathers, saying: “More than 240 years ago, our Founders wrote words that have echoed through the ages. They declared these truths to be self-evident: that we are, all of us, endowed by our creator, with certain unalienable rights, and that among these are life, liberty, and the pursuit of happiness.”

Alluding to the landmark 1973 Supreme Court ruling in Roe v. Wade, Pence added, “Forty-four years ago, our Supreme Court turned away from the first of these timeless ideas.”

Kellyanne Conway, Trump’s campaign manager turned presidential counselor, kicked off the event by reassuring the attendees that the new administration hears them, saying, “Steps away from here, in the White House, a president and a vice president sit at their desks and make decisions for a nation. As they sit there, they stand here with you.”

“This is a new day, a new dawn for life,” Conway said.  She closed her speech with a note of encouragement, saying, “We hear you, see you, we respect you, and we look forward to working with you.”