Why the Electronic Immigration System Is Broken 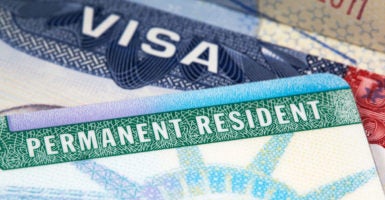 On Monday, the Department of Homeland Security inspector general took the extraordinary step of speaking out against the reinstatement of the Electronic Immigration System to process naturalization benefits for immigrants.

Though the system should theoretically streamline immigration and naturalization processes by automating immigration applications and adjudication, it has become a sinkhole of government funds in recent years, costing $1.2 billion so far, despite the original estimated cost being $536 million.

For all the extra funds that have been extended to support the system, problems continue to abound, leading to the suspension of the program for naturalization benefits in 2016.

The problems that led to suspension of the program included nearly 20,000 missing or duplicate green cards that could be abused by criminals or even terrorists. The inspector general also identified numerous other deficiencies within the system, including problems with interfaces, which harmed the department’s productivity.

Additionally, though over $1 billion has been spent on the Electronic Immigration System, only two types of immigration benefits out of a total of about 90 can be applied for online.

The Department of Homeland Security has also struggled with the related problem of failing to digitize old immigration records, which has allowed illegal immigrants with outstanding deportation orders to become citizens.

Homeland Security employees are now being forced to focus their time and energy toward fixing the problems that have been created by this failed system.

Since the system has not met minimal technical and functional requirements, nor has a risk-based analysis been conducted, the inspector general is urgently recommending the system not be reinstated for naturalization applications.

With the swearing in of Gen. John Kelly as secretary of homeland security, there are certain things that must be focused on over the next four years.

Immigration has been a hot topic in the U.S. for the past several years, and restoring integrity to the immigration system should be high on the new administration’s to-do list.

To that end, automating immigration benefits and adjudication is a great idea to reduce paperwork and simplify the legal immigration and naturalization process. But it must be done correctly in order to keep the American people safe.

So far, the Electronic Immigration System has failed to do so on nearly all counts.

There is a lot of work yet to be done before U.S. Customs and Immigration Services should consider reinstating the Electronic Immigration System for naturalization applications.

The fact that the inspector general has urgently commented on the issue should be a red flag to all that this failed system needs serious attention.