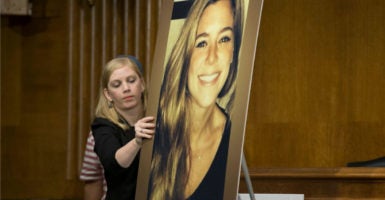 A congressional staffer puts up a photo of Kate Steinle, who was fatally shot in broad daylight on San Francisco's popular Pier 14 while walking with her father, Jim Steinle. He testified before the Senate Judiciary Committee on the death of his daughter on July 21, 2015. (Photo: EPA/Michael Reynolds/Newscom)

A San Francisco jury found the illegal immigrant accused of killing Kate Steinle not guilty of murder Thursday, a stunning result in a case that ignited a nationwide debate over illegal immigration and sanctuary cities.

Jose Ines Garcia Zarate, 45, was found not guilty on all counts in the 2015 shooting, except for felony possession of a weapon. Zarate faced a charge of second-degree murder, but jurors were instructed to consider first-degree murder and involuntary manslaughter.

At trial, Zarate admitted to firing the shot that killed Steinle, 32, but contended that he had picked up a .40-caliber handgun underneath a bench on the San Francisco pier and accidentally fired it July 1, 2015.

A ballistics investigation revealed that the bullet skipped off the pavement before hitting Steinle in the back as she walked with her father on a popular pier, lending credence to Zarate’s claims that the shooting was an accident.

Beautiful Kate Steinle could be your daughter, sister, friend…

She was murdered by a 5 time deported illegal alien
Jose Inez Garcia Zarate
in the ‘sanctuary city’ of San Francisco, where illegals have more rights than American citizens.https://t.co/6hJSAW4XaL pic.twitter.com/tzgmSzuM1C

A Mexican national, Zarate–then known as Juan Francisco López-Sánchez–is a seven-time convicted felon who had been deported from the U.S. five times before the shooting.

Just months before the shooting, Immigration and Customs Enforcement officials lodged an immigration detainer for Zarate with the San Francisco sheriff’s office, which declined the request.

In an interview with local media, Zarate said he had made his way to San Francisco because he knew he would be less likely to be deported because of the city’s sanctuary policies. The incident sparked a nationwide debate over sanctuary cities and later became a central theme of Donald Trump’s campaign for president. Jim Steinle, left, father of Kate Steinle, walks toward the courtroom at the San Francisco Hall of Justice on Oct. 23, 2017. (Photo: Laura A. Oda/TNS/Newscom)

This summer, the House of Representatives passed a bill known as Kate’s Law, which would toughen penalties for illegal immigrants who have been deported and then illegally re-enter the country.

The bill has not been taken up in the Senate.