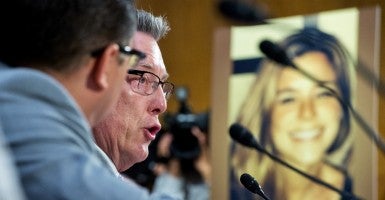 Jim Steinle, father of Kathryn Steinle, who was killed by an illegal immigrant, testifies to Congress about her daughter's death. (Photo: Tom Williams/CQ Roll Call)

The father of Kathryn Steinle, the 32-year-old woman fatally shot earlier this month by an illegal immigrant, made a powerful appeal before Congress Tuesday urging lawmakers to close the “legal loopholes” allowing the release of undocumented immigrants with prior criminal records back onto U.S. streets.

“Due to disjointed laws and basic incompetence at many levels, the U.S. has suffered a self-inflicted wound in the murder of our daughter by the hand of a person that should have never been on the streets of this country,” Jim Steinle said before the Senate Judiciary Committee.

Steinle joined five others whose family members were murdered by illegal immigrants, pleading with Congress to do something to reform immigration laws during the emotional hearing.

Steinle described the moment his daughter was shot as they were walking arm in arm down a public pier in San Francisco, “enjoying a wonderful day together.”

“Suddenly a shot rang out, Kate fell and looked up at me, and said, ‘Help me, Dad.’ Those were the last words I will ever hear from my daughter.”

Juan Francisco Lopez-Sanchez, the man charged with Steinle’s murder, had seven prior felony convictions in the U.S. and was deported to Mexico five separate times. He was released from a San Francisco jail in April under a city law barring the jail’s deputies from informing U.S. Immigrations and Customs Enforcement of his release, despite the agency’s previous notification request.

“A simple notification to ICE could have prevented Kate Steinle’s death,” Feinstein said. During a Senate hearing, George Wilkerson, whose son Josh was murdered by an undocumented immigrant, is comforted by Don Rosenberg, whose son Drew was killed by an unlicensed driver in the U.S. illegally. (Photo: Michael Reynolds/EPA/Newscom)

Sen. Chuck Grassley, R-Iowa, introduced legislation in his opening remarks that would pull federal funding from sanctuary cities and counties that refuse to work with federal immigration officials.

“Enforcing the immigration laws of the United States is not a voluntary or trivial matter,” Grassley said. “Real lives are at stake. Things cannot continue this way.”

The bill would also impose a five-year mandatory minimum prison sentence along with a fine for immigrants who attempt to return to the U.S. after a previous deportation. The provision was named “Kate’s Law” in Steinle’s honor.

“We feel that if Kate’s Law saves one daughter, one son, a mother or a father, Kate’s death won’t be in vain,” Steinle said.

Laura Wilkerson, another witness, whose 18-year-old son Josh was beaten, strangled and burned to death by one of his classmates who was in the U.S. illegally, provided scathing testimony in a moving plea for reform.

She read pieces of her son’s autopsy, describing the braided rope tied around his neck, the multiple fractures in his face and nasal cavity, his crushed throat and voice box, among other horrific injuries the medical examiner deemed the result of “torture.”

“This was our family’s 9/11 terrorist attack by a foreign invader,” she said.

The room was silent, broken only through muffled cries and soft whispers of condolence. Sen. Ted Cruz, R-Texas, hugs Laura Wilkerson, whose son Josh was burned to death by his classmate who was in the U.S. illegally after offering to give him a ride home from school. Wilkerson testified during a Senate Judiciary Committee hearing July 21, 2015. (Photo: Tom Williams/CQ Roll Call/Newscom)

“This government continues to fail, or even recognize, that we have an issue,” Wilkerson continued, saying sanctuary cities “invite” undocumented immigrants into the U.S.

“Your silence speaks volumes,” she said to the senators. “I don’t want sympathy; I want you to do something. Just throw your hat into the ring for Americans. Quit sitting silent because it’s going to help you get a vote.”

During the second half of the hearing, ICE Director Sarah Saldaña noted the agency’s 3-week-old Priority Enforcement Program aimed at spurring cooperation between ICE and local law enforcement regarding release notification requests.

She pushed senators to allow the program to fully take effect before implementing laws mandating compliance.

“I am hopeful that I don’t have to hit somebody over the head with a federal hammer and work with these state and local jurisdictions, who have their own specific problems to address,” she said during tense questioning from Republican senators.

Jim Steinle will return to Capitol Hill later this week to testify before the House in a similar hearing regarding the impact of sanctuary cities.