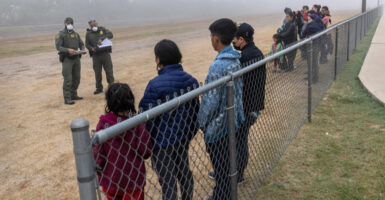 Under a $178 million contract, Southwest Key Programs will provide 1,312 shelter beds for unaccompanied alien children who crossed the border into the U.S. Pictured: The Border Patrol groups unaccompanied minors, left, apart from families waiting to be processed near the U.S.-Mexico border April 10 in La Joya, Texas. (Photo: John Moore/Getty Images)

The Biden administration is paying more than $175 million to a nonprofit that has faced allegations of financial mismanagement to house unaccompanied children who illegally crossed the southern border.

The Department of Health and Human Services awarded a $178 million contract to Southwest Key Programs, also known as SWK Inc., to house unaccompanied children at two Texas facilities, one in Los Fresnos and another in El Paso.

SWK has faced allegations of mismanagement and, in 2019, underwent a major leadership shake-up.

Under the new contract, Southwest Key Programs will provide 1,312 shelter beds for unaccompanied alien children, which the government calls UACs. The contract went into effect Tuesday, according to the Federal Register.

The Department of Health and Human Services’ Office of Inspector General last year called for the organization to refund more than $10 million to the federal government.

It is not clear whether any refund occurred. The nonprofit, however, disputed the HHS inspector general’s findings.

A spokesperson for the nonprofit did not respond to inquiries for this report on Tuesday, Wednesday, or Thursday.

Founded in 1987, Austin-based SWK describes itself as a nonprofit involved in social services, education, and community development organizing. Its mission statement: “Opening doors to opportunity so individuals can achieve their dreams.”

The federal government has paid the nonprofit a total of $447 million in contracts over the past 34 years, mostly from HHS, according to USASpending.gov.

The 2020 inspector general’s report concluded that the organization did not follow rules on spending taxpayers’ money.

“Southwest Key claimed unallowable costs related to the UAC Program,” the report says, referring to unaccompanied children who crossed the border. “Based on our financial review results, we determined that Southwest Key claimed unallowable costs for capital leases, a related-party lease, and other ancillary costs related to leases.”

We also determined that Southwest Key’s financial management system lacked effective controls for ensuring accountability of federal funds. Specifically, Southwest Key did not comply with federal regulations and ensure that it followed its own policies and procedures.

The inspector general said the organization should “ensure that no federal funding, direct or indirect, is used for future compensation that exceeds the statutorily allowed rate for executive compensation.”

In a response dated June 17, 2020, Southwest Key Programs’ interim CEO, Joella L. Brooks, disagreed or partially disagreed with the inspector general’s findings and set out what she contended was proper context regarding the expenditures.

Brooks’ letter highlighted a “great disparity between our findings,” but said the inspector general’s findings prompted the organization to do an analysis that “provides additional clarity that may help to better communicate integral information that we hope weighs in your final decision.”

The previous year, HHS’ Office of Inspector General issued a report saying that in 2016, the nonprofit “did not meet or properly document that it met certain safety standards for the care or release of some children in its custody.”

“Based on our UAC case file sample review results, we estimated that Southwest Key did not properly document the care or release of 38% of all children released to sponsors in [fiscal year] 2016,” the report says, adding:

Without adequate documentation in the UAC case files, ORR [the HHS Office of Refugee Resettlement] could not be assured that for 8,323 children, Southwest Key had followed ORR policies regarding sponsor background checks, prompt care, or that the Department of Homeland Security (DHS) was notified about the child’s release to a sponsor.

Finally, we determined that some Southwest Key employee and volunteer files we reviewed were missing evidence of required background checks.

Southwest Key responded that it was adding oversight and implementing a new software system with safeguards. It disagreed, however, with the inspector general’s criticism of background checks for sponsors.

In March 2019, Juan Sanchez stepped down as chief executive of SWK after 32 years amid a Justice Department investigation of the organization’s finances, The New York Times reported. A month earlier, Chief Financial Officer Melody Chung resigned.

Sanchez was paid a salary of $1.5 million in 2017 and Chung was paid $1 million, the Times reported.

The Atlantic, a left-leaning magazine, faulted Sanchez and his organization for participating in Trump administration enforcement policies at the border that resulted in family separation.

HHS’ Office of Refugee Resettlement and its Administration for Children and Families oversee the contracts for sheltering illegal border crossers.

HHS’ media office acknowledged receipt of an inquiry from The Daily Signal for this report but did not otherwise respond.

As The Daily Signal previously reported, HHS issued at least three other contracts to nonprofit entities for housing unaccompanied children who illegally entered the U.S. Those contracts also went into effect Tuesday.

HHS also announced the award of a $20.9 million contract to Brownsville, Texas-based nonprofit Upbring to provide 76 shelter beds for unaccompanied children who crossed the border. That organization formerly was known as Lutheran Social Services of the South.

HHS also awarded an $18.8 million contract to Urban Strategies in San Benito, Texas, to provide 100 shelter beds for unaccompanied children. The nonprofit has locations across the U.S.