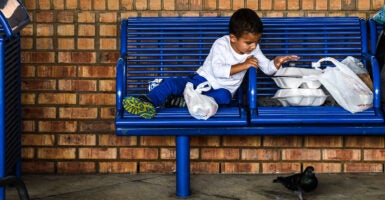 The nonprofit in question didn’t properly document the release of hundreds of unaccompanied children who crossed the border during the Obama administration, an inspector general found. Pictured: A boy from Central America feeds pigeons March 15 while waiting with his mother for their COVID-19 tests after the Border Patrol dropped them off at a bus station in Brownsville, Texas. (Photo: Chandan Khanna/AFP/Getty Images)

In the midst of a border crisis, the Biden administration approved $77.5 million in contracts for a nonprofit to house children who illegally crossed the southern border alone, even though that organization didn’t properly document the release of hundreds of such children during the Obama administration.

One $24.3 million contract is for San Antonio-based BCFS to operate a shelter for unaccompanied children in Los Fresnos, Texas. Another contract, for $53.2 million, is to run a separate shelter in the same city.

BCFS originally stood for Baptist Child and Family Services. The organization is providing a total of 560 beds for unaccompanied children under the federal contracts.

BCFS continued to be a major government contractor following a 2018 report from the Department of Health and Human Services’ Office of Inspector General that found problems with the organization.

The federal agency had awarded multimillion-dollar contracts to BCFS, according to USAspending.gov. In 2019, during the Trump administration, Wayfair LLC employees walked out because the retailer sold $200,000 worth of furniture for use at a BCFS shelter in Carrizo Springs, Texas.

The 77-year-old organization has been a federal contractor under every administration since George W. Bush.

HHS’ Office of Refugee Resettlement and its Administration for Children and Families oversee the new contracts.

“Because of our expertise and because BCFS HHS goes above and beyond for those entrusted to our care, ORR [the Office of Refugee Resettlement] recently requested we take over two current ORR shelters relinquished by another organization,” public information officer Evy Ramos told The Daily Signal in a written statement.

“BCFS HHS was one of the few, if not the only, organization able to provide the immediate services needed to ensure that ORR is able to meet its responsibility, by law, to provide shelter and appropriate services for [unaccompanied children] referred to its care by the Department of Homeland Security,” Ramos said.

The 2018 report from HHS’ Office of Inspector General found that BCFS did not properly document the care and release of 13.7% of all children it released to sponsors in 2015.

Without adequate documentation in the [unaccompanied children] case files, HHS’ Office of Refugee Resettlement (ORR) could not be assured that for 501 children, BCFS HHS had followed ORR policies regarding sponsor background checks, prompt care, or that the Department of Homeland Security (DHS) was notified about the child’s release to a sponsor. Finally, we determined that BCFS HHS was unable to support the number of reunifications it reported to ORR for [fiscal year] 2015.

Ramos said the BCFS organization is accredited through the nonprofit Commission on Accreditation of Rehabilitation Facilities.

HHS referred The Daily Signal’s inquiry about the contracts to the press office of the  Administration for Children and Families, which acknowledged the inquiry but had not responded as of Wednesday.

Ramos, the BCFS spokeswoman, said the organization welcomes examination so that it may improve in providing food, shelter, security, and medical and mental health services to children whose cases are adjudicated by the federal government.

“BCFS HHS welcomes every audit and is constantly striving to be better,” Ramos said. “In addition, we are always self-evaluating and looking for ways we can improve.”

This particular report’s findings are from six years ago, and following the results BCFS HHS worked with ORR to immediately address each [Office of the Inspector General] recommendation.

For more than 77 years, BCFS Health and Human Services has been committed to the well-being of those entrusted into our care.

BCFS HHS does not determine when children arrive or when they leave our facilities, and we are not an immigration policy or advocacy organization.

The inspector general recommended that the organization comply with Office of Refugee Resettlement regulations governing video monitoring in common areas, background checks for sponsors and other household members, admission assessments and medical exams, and discharge notifications to the Department of Homeland Security.

The inspector general’s report also called for BCFS to ensure the accuracy of information it gives to the Office of Refugee Resettlement.

The Department of Health and Human Services provided a $178 million contract to the nonprofit Southwest Key, also known as SWK Inc., to house unaccompanied children at two Texas facilities, one in Los Fresnos and the other in El Paso.

SWK reportedly has faced allegations of abuse and mismanagement and, in 2019, had a major leadership shake-up. The nonprofit is to provide 1,312 shelter beds for children under the new contract.

An SWK spokesperson did not immediately respond to The Daily Signal’s inquiries Tuesday.

The Department of Health and Human Services also announced the award of a $20.9 million contract to the Brownsville, Texas-based nonprofit Upbring to provide 76 shelter beds for unaccompanied children who crossed the southern border. The organization formerly was known as Lutheran Social Services of the South.

HHS also awarded an $18.8 million contract to Urban Strategies in San Benito, Texas, to provide 100 shelter beds for unaccompanied children. The nonprofit has locations across the United States.